Green On Red BBC Sessions To Be Released

Previously unavailable recordings from 1989-1992 are out in May 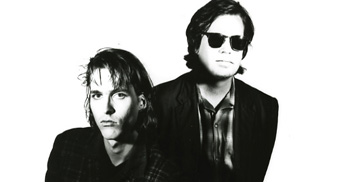 Twenty-two previously unreleased Green On Red BBC Sessions are to be made available on May 7.

The sessions recorded at London’s Maida Vale Studios between 1989 and 1992 includes various experiments and cover versions as well as the band’s own material.

Green On Red founder Dan Stuart remembers the sessions well, for the unconventional way they recorded.

He said: “I imagine that the radio personalities who sponsored these sessions weren’t always pleased with the results. Maybe they had shown up at a gig and watched the singer throw up on his shoes and were hoping for some sort of recorded equivalence.

What they got instead was a Harlan Howard cover (“Busted”) or a thinly disguised knock off of a Jimmy Reed tune (“Itch and Shout”). Gathering all the “Billy” verses from “Pat Garrett & Billy the Kid” was sure to please. Instead of guitar heroics, we offered 16 year old accordionist Sally Burke plucked right off the streets of Norwich. Damn, they sound like decrepit pub rockers, what gives?”

The band originally formed as The Serfers in Tuscon, Arizona, before becoming GOR, but Stuart goes on to explain that the BBC sessions epitomised the way that the group worked, and didn’t work…

He said: “A lot of this sideways approach was possible due to the type of musician we liked to surround ourselves with back then. Green On Red Part 1 had been an experiment in chemistry that was unpredictable at best.

Chris Cacavas and Jack Waterson are both unique players to say the least. The uncertainty of a fizzle or a nuclear chain reaction proved overly stressful, at least for me. Let’s just forget that it was I who was always the catalyst of doom, shall we?

When the original GOR melted down, Chuck and I looked for a certain type of player who was not easily offended and who didn’t mind a little weenie wagging. Rene Coman and Chris Holland were gentlemen who liked to slum; JD Foster was always up for a freak show. The only real mistake was drummer Greg Elmore from Quicksilver Messenger Service who scared the bejesus out of us… just ask our old manager Martin Elbourne, his hands are still shaking.”