American Idiot follow-up will be released in May 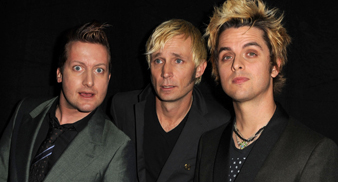 Green Day have revealed on their website Greenday.com that their forthcoming new studio album will be titled ’21st Century Breakdown’ and that it will be released this May.

The follow-up to 2004’s ‘American Idiot’ has been produced by Butch Vig and the 16 tracks are split into three ‘Acts’; ‘Heroes And Cons’, ‘Charlatans And Saints’ and ‘Horseshoes And Handgrenades.’

Green Day, who performed at the 2009 Grammy Awards on Sunday (February 8), have partially revealed track names to US magazing Alt Press.

As well as the title track “21st Century Breakdown”, “Know Your Enemy”, “Viva la Gloria”, “Before the Lobotomy”, “Christian’s Inferno” and “Last Night on Earth” all appear on the first act, ‘Heroes and Cons’