Listen to Damon Albarn and co's gig in full 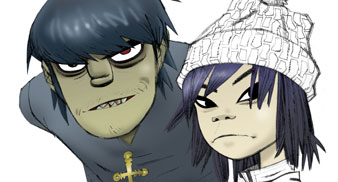 Gorillaz are streaming the audio from their one-off gig in Syria online.

The group played the Citadel in Damascus last Sunday (July 25) – [url=http://nme.com/news/gorillaz/52219]making Damon Albarn’s outfit the first British band to play in the capital[/url].

Usual band members and ex-Clash pair Mick Jones and Paul Simonon, plus De La Soul, Kano, Bashy, the National Orchestra For Arabic Music, Bootie Brown and Bobby Womack performed during the show. All of them feature on the band’s current album ‘Plastic Beach’.

The collective performed a set that included the singles ‘Stylo’, ‘On Melancholy Hill’, ‘Dare’ and ‘Feel Good Inc’, and you can listen to the entire show at NPR.org.

“I just want to explain really briefly why we’re here having this fantastic experience,” Albarn said after they played 2005 single ‘Dirty Harry’. “I came [here] 15 months ago and met a beautiful guy Issam [Rafea] who works with the Syrian National Orchestra For Arabic Music, we made a lot of music together and it was a real turning point, and spending time here in Syria really opened my mind.”

Syria is one of Israel’s strongest opponents, and supports a number of armed groups that carry out attacks against the state.