The Scots drop in midway through tour 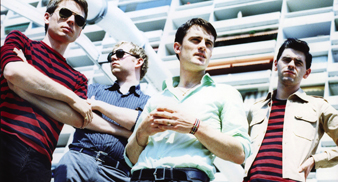 Franz Ferdinand will appear at this year’s Glastonbury festival in a surprise set on the Park Stage.

Franz Ferdinand are currently in the middle of a tour of tiny venues – they played at Yeovil’s Orange Box last night (June 26) – and will get back on the road following their festival appearance.

The band will be previewing songs from their new album, which they are in the process of recording at their hideaway in Glasgow.