Musical comic was suffering from cancer 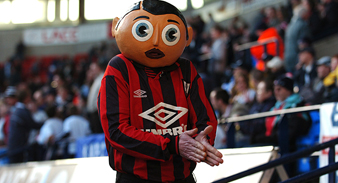 Musical comedy legend Frank Sidebottom has died, it has been announced.

Sidebottom, whose real name was Chris Sievey, was best known for the giant papier mache head cast that he wore while performing.

Sievey was diagnosed with cancer last month and was recovering from an operation to remove a tumour. He collapsed at home yesterday (June 21) and did not recover, according to the Manchester Evening News.

After forming punk band The Freshies, Sievey came up with the character of Sidebottom. His surreal humour influenced by the northern cabaret circuit, and he would often perform songs on an organ. Although family-friendly, Sievey‘s jokes and his songs earned him cult status.

In the ’80s, Sidebottom became closely associated with the Madchester scene, and regularly appeared on television with the late Tony Wilson. Caroline Aherne‘s comedy character Mrs Merton started out as a guest character on a Sidebottom radio show.

Although he retreated into obscurity in the late ’90s, he remained a cult icon, and was still performing last week, when he returned to action after his operation to launch a charity World Cup song called ‘Three Shirts On My Line’, in aid of cancer charities.