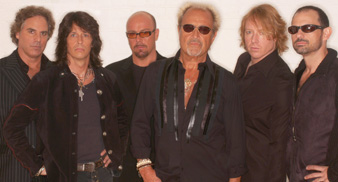 FOREIGNER ANNOUNCE 30th ANNIVERSARY TOUR
In celebration of 30 years since their eponymous four million selling debut album, US rock band Foreigner have announced a full UK Tour for this winter.

Foreigner’s classic hits from several multi-platinum albums through the early 80s included the much since sampled “Cold As Ice,” as well as “Waiting For A Girl Like You” and the number one hit “I Want To Know What Love is.”

The band still led by former Spooky Tooth member Mick Jones are currently writing and recording a new album – expected to be completed by the Autumn.

As well as the UK dates, the band are also about to tour the US and Canada alongside other veteran rockers Def Leppard and Styx.

On their longevity, Mick Jones said: “I had no idea at the beginning what Foreigner would become. It’s amazing. Back when I started the band, I was at a crossroads in my life, whether I was going to carry on in music or get a real job. So thirty years later, I think I made the right decision and, needless to say, it’s gone way beyond my wildest dreams!”

See Foreigner live this Winter at: