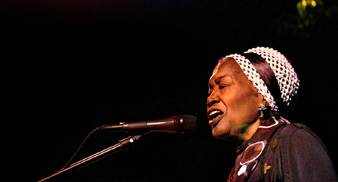 Odetta, the folk singer who influenced Bob Dylan and Joan Baez, is in a critical condition in hospital after suffering – then recovering from – kidney failure.

The 77-year-old, who Dylan mentions throughout the early part of his “Chronicles” book, is currently in New York‘s Lenox Hill Hospital.

However, she hopes to be well enough to perform, as scheduled, at President-elect Barack Obama‘s inauguration in January 2009.

According to The Guardian, her manager, Doug Yeager, wrote to fans: “She has a big poster of Barack Obama taped on the wall across from her bed. Odetta believes she is going to sing at Obama‘s inauguration and I believe that is the reason she is still alive.”