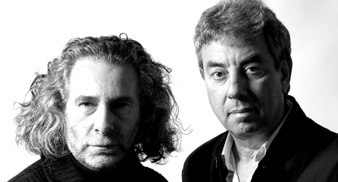 Two brand new tracks recorded by Kevin Godley and Graham Gouldman of brilliant, underrated Mancunian prog-poppers 10cc are being made available on a Greatest Hits compilation, out this week.

“Beautifulloser.com” and “Son of Man” are the first new tracks written and recorded by Godley and Gouldman since 1976’s “How Dare You!”, the last album made by the super-cerebral Manchester band as a four-piece.

As well as the new songs, and the well-known hits including the Number 1s “Rubber Bullets”, “Dreadlock Holiday” and production landmark “I’m Not In Love”, the compilation also collates the talents of 10cc members away from the group.

The album includes Eric Stewart’s work with ’60s beat group The Mindbenders and Gouldman’s compositions for The Yardbirds, The Hollies and Herman’s Hermits, as well as the pre-10cc novelty worldwide smash “Neanderthal Man” by Hotlegs and Godley’s ’80s hits with 10cc partner Lol Creme.

10cc – who split in 1976 with Godley & Creme forming a duo, leaving Gouldman and Stewart to carry on as 10cc – have recently enjoyed something of a critical rehabilitation.

The Feeling – who were signed to Island Records by Gouldman’s A&R son, Louis Bloom – have been name-checking them, The Flaming Lips put “I’m Not In Love” on a compilation of their favourite music called ‘Late Night Tales’, and Radio London DJ Sean Rowley recently admitted that he “started the whole Guilty Pleasures project because of 10cc” and his determination to win them the respect they deserve.