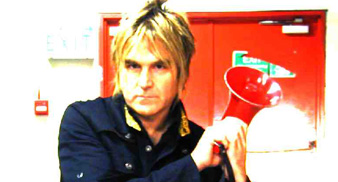 The Alarm‘s Mike Peters is to play at the world’s highest ever concert, on Everest, for charity this month.

Everest Rocks, organised by leukemia sufferer Peters’ charity Love Hope Strength, is the culmination of the Foundation’s work to raise awareness and funds.

Part of the fundraising ideas by Peters’ is to sing fans’ top 20 Alarm songs en route to the concert, for a commemorative CD of the expedition.

Alarm fans can vote for their favourite songs at www.LoveHopeStrength.com. The CD will be released as soon as he returns from Nepal on October 31. Voters will also get their name in the album credits.