Eric Clapton and JJ Cale team up for new album 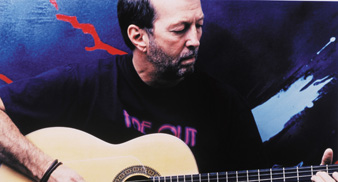 J.J. Cale and Eric Clapton have collaborated on record for the first time on forthcoming release “The Road To Escondido.”

In the past, the duo have shown admiration for each other’s work. Clapton famously covered John Cale’s classics such as ‘Cocaine’ and ‘After Midnight.’

The making of this record was a personal ambition for both musicians, Clapton commenting that, “This was the realisation of what may have been my last ambition, to work with the man whose music has inspired me for as long as I can remember.”

The full track listing is: Danger, Heads in Georgia, Missing Person, When This War Is Over, Sporting Life Blues, Dead End Road, It’s Easy, Hard To Thrill, Anyway The Wind Blows, Three Little Girls, Don’t Cry Sister, Last Will and Testament, Who Am I Telling You and Ride The River.

“The Road To Escondido” is dedicated to Clapton and Preston’s late friend Brian Roylance.

“The Road To Escondido” is released through Reprise November 6.