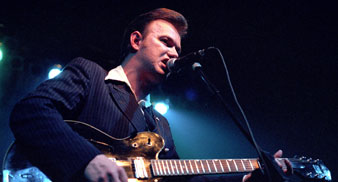 Edwyn Collins is set to release his first newly-written song since suffering two cerebral hemorrhages in 2005.

The new track, called ‘I’m Felling Lucky’ will appear on a forthcoming tribute album for Mavis Staples, and Collins‘ 19 year-old son William plays the guitar solo on it.

Collins will performing the ‘I’m Feeling Lucky’ live at the album’s launch party at London‘s Luminaire venue on February 18. The gig also features live music from Ed Harcourt, while Cracknell and Kevin Rowland will be DJing.

The album, called ‘MAVIS’, is released on February 22, and also features contributions from Candi Staton, Sarah Cracknell and Cerys Matthews.

Collins‘ last album, ‘Home Again’, was released in 2007, though the music was written before his illness.

Dealers, guns and pimps: dark clouds hover over the creation of There's A Riot Goin' On
Advertisement
Blogs