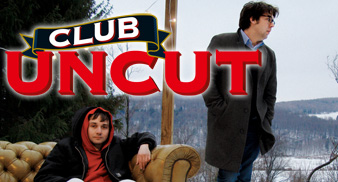 Department Of Eagles have just been confirmed to headline Club Uncut in London on December 3.

As Sam Richards writes in this months issue of the magazine, Department of Eagles are one of New York’s best kept secrets. Their debut, 2003’s Whitey On The Moon certainly seemed to appear out of nowhere and slip away just as rapidly. A collage of dark samples, trip hop beats and the odd dreamy ballad, DoE singer Daniel Rossen now regards it as “a jokey teenage project” never meant to see the light of day.

On its release, Rossen promptly joined Grizzly Bear, focusing most of his energies on helping to write, record and tour their acclaimed Yellow House album. However, the death of Rossen’s father from cancer last year inspired an outpouring of more personal songwriting that he felt wasn’t appropriate for Grizzly Bear. Consequently, he resurrected Department Of Eagles with old NYU roommate Fred Nicolaus to make a second album, the enchanting In Ear Park.

Rossen’s lyrics are complemented by the smudged, far-off quality of the music: simple songs, curiously arranged, and rendered in sepia tones. The beats are gone, but the album retains a multi-layered feel.
Rossen and Nicolaus claim inspiration from those ’60s songwriters who were too neurotic to be hippies: Tim Hardin, Fred Neil, Randy Newman. “There’s definitely a lot of obsession over songcraft, much more than having any unified feel or way of playing,” says the timid Rossen, who still hasn’t figured out how he’s going to take DoE on the road and turn a secretive sideshow into a main event. “There are lots of possibilities. Exciting, but also confusing!”

Department of Eagles will play at the Borderline, just off Charing Cross Road on December 3, tickets are only £8 through our exclusive ticket link here.