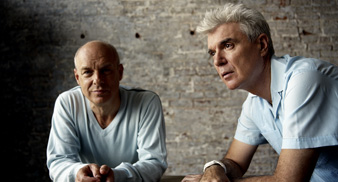 The shows, part of the South Bank Centre’s annual ETHER festival at the Royal Festival Hall, are also part of the “Songs of David Byrne and Brian Eno” tour which starts in the US this Autumn, showcasing the pair’s first new material written together in 27 years, although Eno will not be appearing at the London concerts.

Byrne explained the concept of the shows as linking together the work the pair have done since the first three Talking Heads albums, saying: “The live shows will maybe try to draw a line linking this new material with what we did 30 years ago, a little bit anyway.”

The new album ‘Everything That Happens Will Happen Today” was self-released in August to great acclaim.

Tickets will go on sale to Southbank Centre Members tomorrow (October 2) at 9am and go on general sale on Oct 3 at 9am.