US glam band back with album of rock favourites 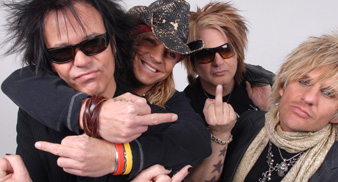 Platinum-selling US glam metal band Poison have unveiled the track listing for their new studio album of rock covers.

The band who have had success with diverse cover versions on many of their previous albums throughout the 80s and 90s have recorded thirteen tracks by artists from David Bowie to Grand Funk Railroad.

“Poison’d” to be released on June 4 is the group’s first new release since the critically panned “Hollyweird” in 2002. They have since had a re-issue campaign of their early albums and a Greatest Hits package released.

The band picked their favorite trcaks to cover including Bowie’s “Suffragete City” and The Rolling Stones’ “Dead Flowers.”

Some of the tracks such as Kiss’ “Rock and Roll All Nite” and Loggins & Messina’s “Your Mama Don’t Dance” from earlier Poison releases.

Poison are about to embark on a massive North American tour, and front man Bret Michaels is due to star in a new VH1 reality TV series called -” Rock of Love with Bret Michaels.” VH1’s description of the show has “the hard-rockin’ Poison front man looking for a woman who can truly keep up with his rock-n-roll lifestyle and not become jealous of his one true passion — performing, which has been the reason for and destruction of most of his relationships.”