Lou Reed wants clips to be his own 'Black Swan' 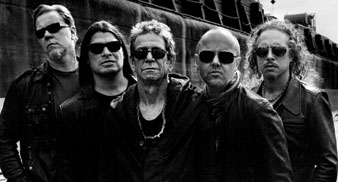 American film director Darren Aronofsky will direct a video for Lou Reed and Metallica‘s ‘Lulu’ collaboration, according to reports.

The Wall Street Journal is reporting that the Oscar-nominated director will be given control of the video for the song ‘Iced Honey’, and the clip will be available for screening later this month.

Reed and Metallica released the album, which is based around German dramatist Frank Wedekind’s 1913 play about the life of an abused dancer, earlier this week (October 31).

Metallica drummer Lars Ulrich said that working with both former Velvet Underground rocker Reed and Aronofsky was “living the dream”, while Reed revealed that he hopes the video will become “his Black Swan“.

Earlier this year, Aronofsky an received Academy Award nomination for Best Director for his work on Black Swan, with his other critically acclaimed films including 2000’s Requiem For A Dream and 2008’s The Wrestler.

Lou Reed recently claimed that Metallica fans were so enraged by ‘Lulu’ that they had [url=http://www.nme.com/news/lou-reed/60148]threatened to shoot him[/url]. He said: “They haven’t even heard the record yet, and they’re recommending various forms of torture and death.”

Metallica are currently working on a new album, according to bass player Rob Trujillo. He explained that the follow-up to ‘Death Magnetic’ was the launch pad for “the beginning of something very, very cool”.

The metal legends will perform tracks from ‘Lulu’ with Reed on November 8 on Later… With Jools Holland.