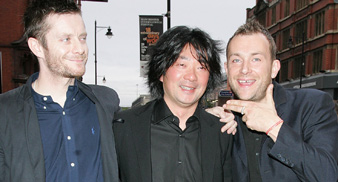 Damon Albarn and Jamie Hewlett, the pair who created Gorillaz have cofirmed that they are to release a new album this Summer.

Albarn and Hewlett have adapted their compositions from the theatre show ‘Monkey: Journey To The West’ which debuted last year at Manchester Opera House for an album entitled ‘Monkey.’

The show has now come to London, and opened at the Royal Opera House last night (July 23).