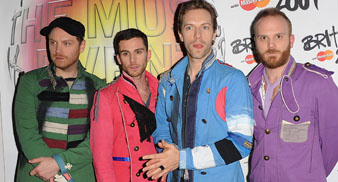 Despite being nominated in four categories, Coldplay failed to win a single award at last night’s Brit Awards (February18).

The band lost both Best British Album and Best British Single to Duffy, while Iron Maiden won Best Live Act and Elbow were awarded Best British Group – both awards Coldplay were up for.

“We’ve just got back from Japan, lost all the BRITs,” said a visibly disappointed Martin after the ceremony, “it’s been a shit day frankly”.

Duffy won a total of four awards, including Best Breakthrough Act and Best British Female. Paul Weller, who was not present at the ceremony, won Best British Male, while Kings of Leon won Best international Album and Best International Group.

The Outstanding Contribution To Music award was given to The Pet Shop Boys, while newcomer Florence and the Machine won the Critic’s Choice.