The singer cites "irresolvable personality conflicts" in the super-group 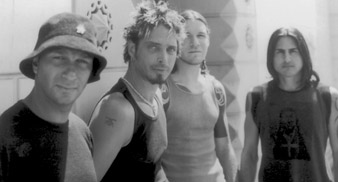 Rock singer Chris Cornell has quit fronting super-group Audioslave, saying there were “irresolvable personality conflicts as well as musical diffrences” between them.

n a statement released yesterday, Cornell also said, “I am permanently leaving the band Audioslave. I wish the other three members nothing but the best in all of their future endeavours.”

The split is not unexpected, his bandmates Tom Morello, Tim Commerford and Brad Wilk have reunited with singer Zack de la Rocha to resurrect Rage Against The Machine. Their comeback show will be this April at US festival Coachella.

Tom Morello and co’s have not confirmed any further plans to record or tour as yet.

Previously famous for fronting influential grunge band Soundgarden, Cornell is to return to being a solo artist. His second album “Carry On” is due out in May.

His solo track “You Know My Name” was the theme song for the latest James Bond movie “Casino Royale.”