Carl Barat Has A Libertine Party For Chav Show

Tim Burgess plus friends Klaxons play a mix of own songs 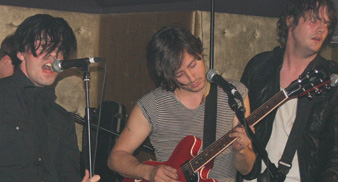 Playing a short set for Alan McGee’s new TV venture Death Disco TV, the filming in front of a live audience at London’s swanky Cuckoo Club, descended into jovial jibes about how many indie musicians you can fit on to a small stage.

Founder Chav member, Andy Burrows from Razorlight was absent from last night’s show but watched from the front by Death Disco founder Alan McGee, The Chavs enlisted the help of lots of others.

Dirty Pretty Things Didz Hammond and Anthony Rossomando padded out the stage, as well as Klaxons Jamie Reynolds and Steffan Halperin on bass and beats and former Libertine drummer Gary Powell on drums.

Charlatan Tim Burgess went from lead vocals on the first as-yet-untitled track which “we wrote today” to playing bongoes by the end of the set with the Klaxons flanking him with tamborines and other percussion instruments.

The Chavs plus friends also played an off key version of Klaxons’ ‘Golden Skans’ with Burgess on vocals, which led via a bass duties swap from Jamie Klaxon to Didz Hammond, on to a slowed-down drawling version of Charlatans hit ‘North Country Boy.’

They ended the jamboree of percussion and tamborine playing with DPT’s ‘Bang Bang, You’re Dead’ and ‘Blood Thirsty Bastards.’

The show, the first of a monthly series for Rockworld TV, will be broadcast in early July. Other acts who will appear on the first episode are The Sessions and nu-raver Shy Child.

Rockworld.TV is available on SKY channel 368 and on demand through their IPTV platform online here