Dennis Hopper's bowels! The news, the gossip and the boozing from this year's Cannes Film Festival 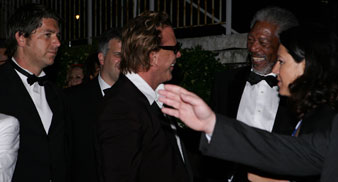 The usual array of buffed and beautiful celebrities were out in force at this year’s Cannes Film Festival – whether it be a curiously bouffant GEORGE LUCAS leading the charge at the premier of Star Wars Episode 3: Revenge Of The Sith, or MATT DILLON hanging out round the bar terrace at the Grand Hotel, dresed unassumingly in black jeans and a t shirt, and happily chatting away with anyone who dropped by to say hello. UNCUT spotted the likes of BENICIO DEL TORO, VIGGO MORTENSEN, MICHAEL MADSEN, CHRISTOPHER DOYLE and DENNIS HOPPER out and about on the Croisette. Our favourite Hopper story went something like this: when asked whether he still took drugs by a friend of UNCUT, the Easy Rider star admitted he still smokes weed “because it keeps the bowels regular.” Haven’t you heard of dried apricots, Dennis?

And the parties? Yep, we went to a few, and we drank southern France’s reserves of rosé dry. They got off to a bumpy start, though, due to some serious transport difficulties getting to the hyper-hot annual MTV party, this year held in honour of UNCUT’s forthcoming Film Of The Month, Kung Fu Hustle – while the Star Wars’ party was widely considered a disappointment, save for the giant YODA ice sculptures. Elsewhere, at the party for Last Days – GUS VAN SANT’s incredible fictionalised take on the last days of KURT COBAIN – we were treated to a set by grunge rockers Pagoda, featuring the film’s star MICHAEL PITT on vocals. We also caught MALCOLM McLAREN playing his *own* records at the yacht party for GAEL GARCIA BERNAL’s new film, The King. Or rather, someone else was playing them while Talcy Malcy hung around in the background.

Cannes 05 also saw a large number of major new projects announced, including new films from DAVID LYNCH, SHANE MEADOWS and ROBERT ALTMAN, screening of footage from TERRY GILLIAM’s Brothers’ Grimm footage and the creation of a major new distributor from Time Warner companies New Line Cinema and HBO Films. Lynch’s latest project is INLAND EMPIRE, starring LAURA DERN HARRY DEAN STANTON and JUSTIN THEROUX – who’ve all worked with the Wild At Heart director before. “It’s about a woman in trouble, and it’s a mystery, and that¹s all I want to say about it,” Lynch is quoted in Variety. Meadows – whose last film, Dead Man’s Shoes, was one of UNCUT’s favourite films from 2004 – is drawing on his own experiences as a skinhead for Oi! This Is England, set in England in 1983.

Also revealed at Cannes is a documentary called Requiem for Billy The Kid, currently in post-production, produced by legendary French director of Diva and Betty Blue, JEAN-JACQUES BIENEIX. The doc includes footage from SAM PECKINPAH’s Pat Garret And Billy The Kid, plus interviews with KRIS KRISTOFFERSON, who played Billy in the movie, and screenwriter RUDY WURLIZTER. ALTMAN’s new movie will star MERYL STREEP, WOODY HARRELSON and JOHN C REILLY and is a spin-off from GARRISON KEILLOR’s long-running radio show, A Prairie Home Companion.

Elsewhere, among the myriad of new movie projects their newly formed WeinsteinCo are involved with, HARVEY and BOB WEINSTEIN announced their forthcoming return to concert promoting – presenting the ROLLING STONES at the Giants Stadium, New Jersey, in September. Finally, HBO Films and New Line Cinema have formed Picturehouse, a new theatrical distribution whose slate has nine films lined up, including Last Days, Fur – starring NICOLE KIDMAN and ROBERT DOWNEY JNR – and MICHAEL WINTERBOTTOM’s A Cock And Bull Story, aka Tristram Shandy, starring STEVE COOGAN. Right. That’s it. The booze is finally wearing off so we’re off to bed. Check back here to uncut.co.uk for our final report on the movie’s that mattered at this year’s Cannes Film Festival.