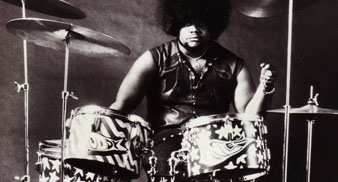 Buddy Miles, the drummer in Jimi Hendrix’s Band Of Gypsys, has died at his home in Austin, Texas. He was 60.

Miles had congestive heart failure, according to his publicist, Duane Lee.

His long and auspicious career began when he was 11, figuring in his father’s jazz band The BeBops in Omaha, Nebraska. Mills also backed The Delfonics, The Ink Spots and Wilson Pickett, and met Hendrix when both were jobbing musicians in the early ‘60s. He first came to real prominence in 1967, however, when he formed The Electric Flag with Mike Bloomfield.

The drummer moved back into Hendrix’s orbit when the guitarist helped produce the Buddy Miles Express album, Electric Church, in 1969. When the Experience disbanded soon after, Miles joined Hendrix’s Band Of Gypsys. Hendrix’s respect for him was so pronounced, two Miles tunes – “We Gotta Live Together” and “Changes” – appeared on the Band Of Gypsys album.

After his brief time with Hendrix, Miles’ career encompassed solo albums, Hendrix-related reunions and lucrative session work (with Santana, George Clinton, Stevie Wonder, Muddy Waters, Barry White and David Bowie among others). Bizarrely, though, he found his greatest fame as a vocalist, providing the voice for a piece of animated fruit on a series of commercials for California Raisins.