Buddy Holly Commemorative CD and DVD To Be Released

New previously unseen footage from the 'Day The Music Died' 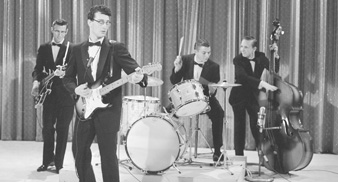 A new 50 track compilation album commemorating 50 years since Buddy Holly‘s death is to be released on February 2.

‘The Very Best of Buddy Holly and The Crickets’ will be accompanied by a DVD ‘The Music Of Buddy Holly And The Crickets, The Definitive Story’ – which features live performances from the Ed Sullivan show (pictured above) as well as previously unseen footage and interviews with people that were close to Holly.

Holly died in a plane crash on February 3, 1958, however
his music influenced a lot of musicians including Bob Dylan,
The Rolling Stones and Eric Clapton.