Boo Radleys Frontman Is Back 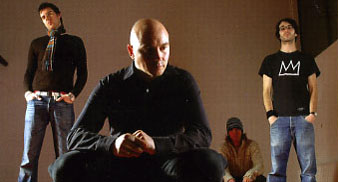 Sice, the former Boo Radleys lead singer has come out of retirement with the announcement of a forthcoming album – his first in nine years.

The Boo Radleys split up in 1999 after a decade of mixed success. They found massive popularity during the height of Britpop with their ’96 album ‘Wake Up!’ on the back of catchy summer hit ‘Wake Up Boo!’

After the band’s critically and commercially panned final two albums ‘C’mon Kids’ and ‘Kingsize’ – Sice vowed to retire and never come back to the industry.

However, after periodic flirtations with music, Sice is back after forming a new band, “Paperlung” with bassist Simon Gardiner after a chance meeting in a bar at Victoria Station. Within eight weeks, Sice recruited Ben Datlen on guitar and Guillaume Jambel on drums added to the line up, and already played their first gig together.

Paperlung’s just completed debut album, “Balance” is says Sice: “Unashamedly melodic. I can’t write songs any other way. What matters most to me in music is melody, with harmony coming a close second.”

He adds: “The album is all about relationships. Every kind of human relationship: partner to partner, father to child, child to parents and friend to friend. Balance, as a title, sums up what most people are forever striving to achieve within these relationships.”

Balance is released through Shifty Disco on October 1.

Check out the video for album track ‘Do What Thou Will’ here: