Mike D says Dylan is 'one of the first b-boys, if not the first' 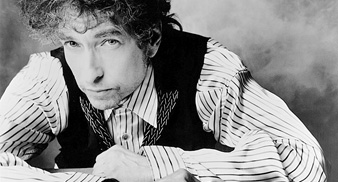 Bob Dylan‘s voice is to appear on a future Beastie Boys album, Hot Sauce Committee Pt 2, which is currently being worke on.

The Beastie Boys, who released Pt 1 this September, say they have sampled Dylan praising them on his Theme Time Radio show, when he played one of their tracks and said he was “a big fan.”

Speaking to DiS, Beastie Boy Mike D says Dylan is a musical hero, commenting, “He’s one of the first b-boys, if not the first. What more to say? When you think ‘songwriter’ you think him, Gordon Lightfoot; there’s not many others.”

Ad-Rock adds nore praise, saying: “Billy Joel is the fifth b-boy. That’s just a side note. Bob Dylan is one of the greatest songwriters of all time.”

Plus! More music and film news from Uncut click here