Blur to receive Outstanding Contribution To Music Award at 2012 Brits

Damon Albarn and co follow in footsteps of Paul McCartney, Oasis and Queen 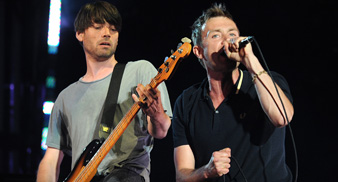 Blur will receive the Outstanding Contribution To Music Award at next year’s Brit Awards .

The band will be presented with the gong, which was rested for a year at the 2011 ceremony, at the O2 Arena on February 21.

Damon Albarn has hailed the nod, commenting that it is “recognition for all the work and all the heartache that has gone into this band.”

Guitarist Graham Coxon added: “Being in a band this long is like a kind of time travel”.

Previous winners of the award include the band’s Britpop rivals Oasis, Paul McCartney, The Who, U2 and Queen.

The announcement comes after recent hints from Albarn and bassist Alex James that Blur were set to reconvene in 2012 following 2009’s successful Hyde Park gigs and festival appearances.

Back in October, Albarn told NME that the band had met up and recorded a spoken word track together earlier this year. He added that the band might fancy another crack at playing in America next year.

Meanwhile James said earlier this week that Blur would be meeting up for a Christmas drink – and would “probably” record together again at some point.