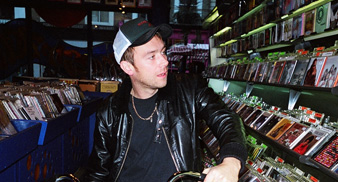 Blur/Gorillaz mainman Damon Albarn is set to write and record a new album in the Democratic Republic of Congo, it has been announced.

Albarn, who is currently performing in opera Doctor Dee in Manchester, will travel to the African country with a team of producers and other artists with the intention of recording an album in a week.

The project has been put together in collaboration with Oxfam, who are also likely to receive the proceeds from the project.

Albarn has recorded in Africa a number of times before. He produced collaborative album ‘Mali Music’ in 2002, created parts of Blur‘s last studio album ‘Think Tank’ on the continent and undertook recording in Nigeria with The Good, The Bad & The Queen bandmate Tony Allen.

The singer has not said whether he will be working with Blur on new material after he completes his work as part of Doctor Dee. Guitarist Graham Coxon and drummer Dave Rowntree have previously said that the band have discussed the prospect, but nothing has been finalised.