Coxon and Albarn perform “This Is A Low”, Oasis win Best British Band 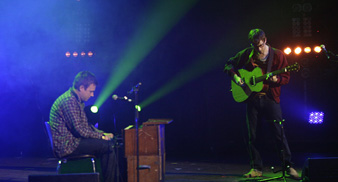 The duo performed ‘This Is A Low’ from their 1995 album Parklife, while Oasis won Best British Band and Best Blog for Noel Gallagher’s ‘Tales From The Middle Of Nowhere’.

“This is ironic, we’re being given best British band by the second-best British comedian,” joked Gallagher after receiving the award from comedian Russell Brand. “Thanks to all the readers who’ve voted. This has turned into a right bad idea.”

Other awards went to Kings Of Leon, who won Best Album for ‘Only By The Night’, MGMT, who picked up Best New Act and Best Track for “Time To Pretend”, and Muse, who were awarded Best Live Act and Best Album Artwork for ‘HAARP’. Muse frontman Matt Bellamy was also voted Sexiest Male by NME readers. The Killers won Best International Band and former Libertines frontman Pete Doherty won Best Solo Artist.

The Cure were presented with the Godlike Genius Award by director Tim Burton, and went on to close the ceremony with a 30 minute live performance.

Other performances came from Elbow, who were given an award for Outstanding Contribution To Music, Glasvegas and Franz Ferdinand, who performed a cover of Blondie’s “Call Me”.

Presented by comedian Mark Watson, the awards will be broadcast on Channel 4 on Friday.