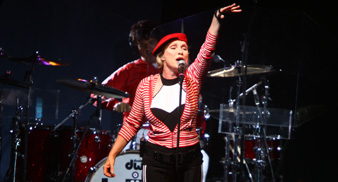 Blondie have announced details of their first studio album for eight years, which is set to be titled ‘Panic Of Girls’ and will be released in September.

The album, which has been produced by Jeff Saltzman [The Killers, Fischerspooner] and Kato Khandwala [Paramore, Papa Roach], was recorded principally in the band’s home town of New York.

‘Panic Of Girls’, which is the follow up to 2003’s ‘The Curse Of Blondie’, contains covers of Sophia George‘s ‘Girlie Girlie’ and Beirut‘s ‘Sunday Smile’. Beirut‘s Zach Condon also appears on the album, providing guest vocals.

The band have additionally released the video for the album’s first single ‘Mother’, which you can see at the bottom of the page by scrolling down and clicking.

Blondie are set to play a number of UK festivals this summer, including appearances at Kendal Calling festival and Camp Bestival.

The tracklisting for ‘Panic Of Girls’ is as follows: