The Scottish folk legend had been battling cancer in recent years 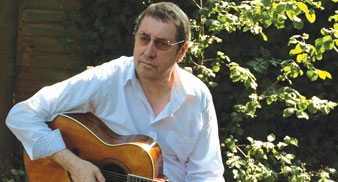 Bert Jansch has died at age of 67 after a lengthy battle with lung cancer.

The legendary Scottish folk musician had been suffering from lung cancer over the past couple of years and according to STV.tv, he lost his battle with the disease this morning (October 5),

Jansch cancelled a scheduled gig in Edinburgh in August, with a statement on his official website saying he was “unwell” and set to spend “at least” one week in hospital.

A founding member of ’60s/’70s folk rock band Pentangle, Jansch made his live comeback last year after battling back from cancer, playing a co-headlining US tour with Neil Young. He also played at Eric Clapton‘s Crossroads Festival last year.

A virtuoso acoustic guitar player, the 67-year-old is widely considered to have influenced the likes of Jimmy Page, Johnny Marr, Graham Coxon and Pete Doherty, with whom he has collaborated live.

Meanwhile, Coxon once told Uncut: “I’m not as good as him, but I’m a huge fan of Bert Jansch.”