But can Pete Doherty cut it as a stadium rocker? 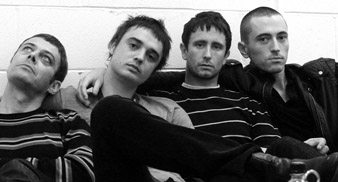 The cavernous venue was far from sold out, but a plainly rejuvenated Pete Doherty and his well-drilled bandmates were in uncharacteristically professional form. The setlist was drawn mainly from their major label debut, “Shotter’s Nation”, and featured an acoustic interlude. There were no Libertines songs included in the set.

‘Carry On Up The Morning’
‘Delivery’
‘Beg, Steal Or Borrow’
‘Baddies Boogie’
‘Unstookietitled’
‘Side Of The Road’
‘Unbilotitled’
‘The Blinding’
‘You Talk’
‘Sedative’
‘Crumb Begging Baghead’
‘Lost Art Of Murder’
‘There She Goes (A Little Heartache)’
‘Albion’
‘Pipe Down’
‘Killamangiro’
‘Back From The Dead’
‘I Wish’
‘Fuck Forever’

The tour continues tonight (November 23) at Newcastle’s Metro Arena, before heading to: