Frontman has been busy in the studio, guitarist DJ Ashba reveals 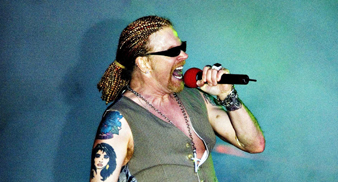 Guns N’ Roses frontman Axl Rose has got over three albums’ worth of new songs recorded and ready for release, according to the band’s guitarist DJ Ashba.

In an interview with Australian radio station Triple M Ashba said the frontman “has a lot of great songs up his sleeve. He probably has three albums’ worth of stuff recorded”.

He went on to talk about how Rose doesn’t seem too keen to show the world his new songs yet. He said the singer “just sits down at the piano and plays. I’m like, ‘This is amazing. People have to hear this song.’ And he’s like, ‘Ah, this is something I’m tinkering on.’ He’s just a genius when it comes down to music and I just cannot wait to sit down with an acoustic guitar and just write. He’s just got this gift that’s very, very rare.”