Brilliant Brit psych flick - plus the soundtrack - gets welcome reissue 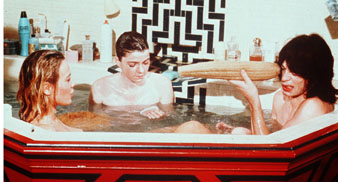 The most insane rock’n’roll movie of ‘em all – 1970’s “Performance” – is to get its first-ever release on DVD next month.

A psychedelic blend of fantasy, freaks and flashy editing, this British film classic follows the collision of two worlds when a psychotic East End gangster (played by Edward Fox) takes refuge in the home of a washed-up junkie rocker (brought to life by a wonderfully louche performance from Mick Jagger).

“Performance” features a who’s who of Uncut icons: the film marked the directorial debut of the legendary Nicolas Roeg (“Don’t Look Now”, “The Man Who Fell To Earth”), and as well as Jagger, Keith Richards’ former flame, Anita Pallenberg, makes an appearance.

This controversial and explicit film has a brilliant soundtrack, too. Arranged, produced and scored by musical whiz-kid Jack Nitzsche (who had previously produced Neil Young and Tim Buckley) it showcases superb cuts from Ry Cooder, Randy Newman and The Last Poets’ Russ Titelman – as well as a menacing performance from Jagger himself on “Memo From Turner.”

“Performance” the DVD and the OST will both be released on March 5.