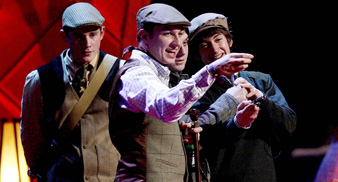 The Arctic Monkeys won Best British Group and album, for the second year in a row for their second album Favourite Worst Nightmare. The band attended the BRIT Awards for the first time, and accepted their awards dressed up as fox hunters, and blew a horn onstage.

In a video message to the audience, front man Dave Grohl said: “Hey everybody, thanks very much for the Brit Award,” he said. “It really is an honour to be recognised alongside the likes of Huey Lewis And The News, Culture Club, MC Hammer and Kula Shaker.

Amy Winehouse made her first live appearance since entering rehab at the Earls Court ceremony, performing with Mark Ronson for her cover version of the Zutons’ ‘Valerie’ – which was nominated for but did not win the Best Single category.

She later returned to the stage to perform ‘Love Is A Losing Game’ from her multiple Grammy winning album Back To Black.

Former Beatle Sir Paul McCartney closed the 2008 BRITS by performing a medley of hits from his longstanding career, including ‘Live and Let Die’, ‘Hey Jude’, ‘Lady Madonna’ and ‘Get Back’. after being awarded this year’s Outstanding Contribution to Music Award.

Adele, Kate Nash, Kanye West, Mika, Mark Ronson and Kylie Minogue each picked up a BRIT Award each too.