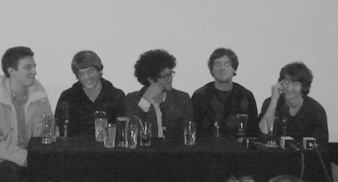 Arctic Monkeys premiered their live film ‘At The Apollo’ at an intimate screening at London’s Rex Cinema last night (October 7), saying afterwards that it was the “right time” to make their first film.

The DVD, shot on film and directed by the IT Crowd’s Richard Ayoade, who has previously shot the band’s promo video for “Flourescent Adolescent,” was partly inspired by great live films such as ‘The Last Waltz’ and ‘Last Man Standing’, the band told the 75-person audience at a press conference after the screening.

The 20-song show at the Manchester Apollo was recorded at the end of the band’s 2007 world tour and has captured the band up close and with full honesty. The audience are only shown in between songs when frontman Alex Turner interacts with the audience.

Notoriously shy, Turner admitted that he doesn’t really remember what he says on stage and seeing himself captured on film was a bit of an eye-opener. He said ” I wish each had been a sentence shorter, or not happened at all. It’s all off the cuff and I don’t really remember.”

Speaking about the fact that this is the Monkeys’ first ever live film, Matt Helders spoke about having to get used to having so many cameras on stage with them, when in general they are uneasy with attention directed at them. He explained “Stuff like this [the conference] we don’t know what we’re doing. The cameras that night were for our benefit. We weren’t reluctant like we have been in the past, this seemed like the time to do it.”

The band also spoke briefly about their third album, which they are ‘in the early stages’ of making with Queens of the Stone Age‘s Josh Homme on producing duties. Refusing to be drawn on how that is affecting their sound on the new album, Turner simply coyly said “It’s going good.”

As previously reported, Arctic Monkeys are giving away a free download to fans who pre-order a special edition of the film on DVD.

There will also be a one-off screening with a Q&A session with Richard Ayoade and introduction by the Arctic Monkeys on October 14.

At the Apollo will also screen at a selection of Vue cinemas and other independent venues.

Arctic Monkeys At The Apollo track listing is:

‘Brianstorm’
‘This House Is A Circus’
‘Teddy Picker’
‘I Bet You Look Good On The Dancefloor’
‘Dancing Shoes’
‘From The Ritz To The Rubble’
‘Fake Tales Of San Francisco’
‘When the Sun Goes Down’
‘Nettles’
‘D Is For Dangerous’
‘Leave Before The Lights Come On’
‘Fluorescent Adolescent’
‘Still Take You Home’
‘Da Frame 2R’
‘Plastic Tramp’
‘505’
‘Do Me A Favour’
‘A Certain Romance’
‘The View From The Afternoon’
‘If You Were There, Beware’