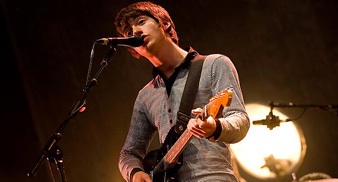 Arctic Monkeys played a triumphant show at Old Trafford in Manchester last night, in spite of a power cut which threatened to derail the gig.

The sound cut out in the middle of “Balaclava”, but was restored after a ten-minute gap. The gig was the biggest of the Monkeys’ extraordinary career so far. They play Old Trafford again tonight.

The band’s hand-picked supporting bill also featured a rejuvenated Supergrass, The Coral, The Parrots (a Beatles tribute act from Japan) and Amy Winehouse, who played a storming cover of The Specials’ “Hey Little Rich Girl”.

The Monkeys’ setlist contained no such surprises – there was no room for the cover of “Diamonds Are Forever” which they unveiled during their Glastonbury headline set. It was, however, a display by a band growing more confident and powerful with every gig. For Uncut’s on-the-spot review, check out the report on our Festivals blog.