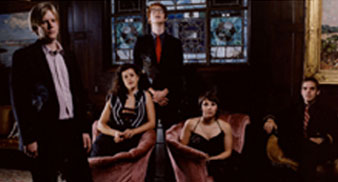 Arcade Fire will visit the UK in the New Year for five very special shows.

The band will play three nights at St John’s Church, Smith Square with a further two nights at the Porchester Hall, West London.

These dates are Arcade Fire’s first UK shows since September 2005.

Tickets for the intimate shows will go on sale this Friday(December 8)2.
The band’s as-yet-untitled second album will be released spring 2007.