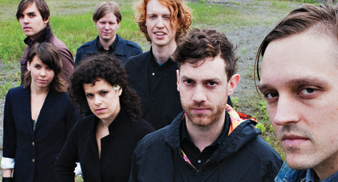 The Montreal band played a host of tracks from all three of their albums plus new track ‘Speaking In Tongues’, which features on the repackaged version of their 2010 LP ‘The Suburbs’.

Although ex-Talking Heads singer David Byrne features on the studio performance of the track, he didn’t make a surprise appearance tonight. Instead support act Owen Pallett stepped in to help out on violin.

It was only the song’s second appearance after a recent show in France. “That was the least time we’ve been scared doing a song, we’ve only really played in rehearsal to 60,000 people, so thank you so much,” Butler said after it was warmly received.

The band arrived onstage to a huge cinema billboard backdrop and a giant screen which projected old cinema ads and clips from the band’s short film ‘Scenes From The Suburbs’ before they kicked off with ‘Ready To Start’.

Singer Win Butler then took the 60,000 crowd by surprise early on when he declared: “I can’t tell you how happy we are to be here. This a song we normally do later in the set but I want to fucking do it now.” The band then launched into ‘Wake Up’ to huge cheers.

Before starting ‘The Suburbs’ he made a joke about the warm weather and before later taking a pop at the local residents while he was mid-song on ‘Month Of May’. “You know all the rich people who live around this park, every year they try to buy up the rights so you can’t make a little noise,” he said referring to the venue’s strict time curfew.

He took a further dig during ‘Neighborhood #2 (Laika)’, adding: “The neighbourhood is asking if you can keep it down a little bit.”

The band went on to wrap up their show with ‘Keep The Car Running’, ‘Neighborhood #1 (Tunnels)’ and ‘Sprawl II (Mountains Beyond Mountains)’.

As they left the stage, Butler told the crowd it could be a while before Arcade Fire return to the UK. “Goodbye London, we’ll see you in a couple years,” he added.

Earlier Mumford & Sons played their last performance in the capital before they head into the studio to record their second album.

They performed a series of new tracks including ‘Below My Feet’, ‘Lover Of The Light’ and ‘Lover’s Eyes’ alongside more well-known hits such as ‘Little Lion Man’.