An introduction to the new Uncut 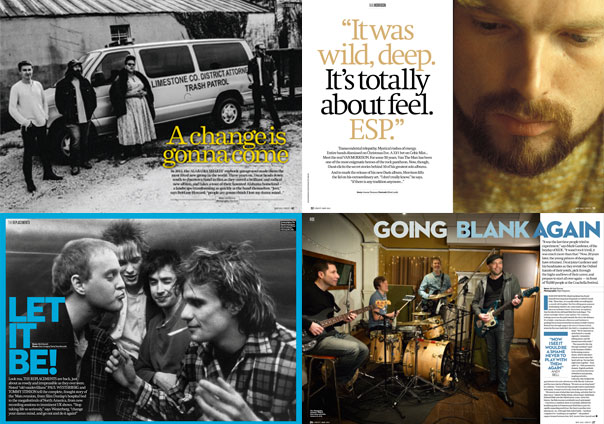 While we were putting together the new issue of Uncut – out today, in the UK, and with Van Morrison on the cover – I was also reading Richard King’s new book, Original Rockers, ostensibly a memoir of the author’s years working in a Bristol record shop, Revolver, some 20 years ago.

I first came across King around that time, when he used to play guitar in certain incarnations of Flying Saucer Attack, one of the most interesting bands to develop the gauzy, cacophonous possibilities suggested by My Bloody Valentine. At live shows, he played with a physical abandon somewhat at odds with the furrowed-brow concentration favoured by most of his bandmates; afterwards, he was equally vigorous and entertaining to talk with about music.

That nuanced, eclectic knowledge, it now transpires, was mostly garnered behind the counter in that Bristol store, and is something that makes Original Rockers (reviewed properly by Allan Jones in the new Uncut) far transcend the sentimental genre epitomised by High Fidelity. Time and again through the book, King goes off on long, meticulous reveries about specific records: a Can bootleg called “Horror Trip In The Paperhouse”; Keith Hudson’s “Pick A Dub”; Virginia Astley’s “From Gardens Where We Feel Secure”; Rod Stewart’s “Every Picture Tells A Story”. These are romantic epiphanies, but they’re also fine music criticism, written with clear-eyed precision as much as literary verve.

Anyhow, I’d just finished the book the other weekend, when I found myself hanging out at a record stall on Cambridge market, watching the owner sell a copy of “A Saucerful Of Secrets” – not the first, one suspects – to a student, and trying to remember which of the dozen Bill Evans albums in front of me I already owned. Flicking through the crates, I also came across a copy of “Common One”, an album which I often think might be my favourite Van Morrison record, and which is discussed at length as part of Graeme Thomson’s engrossing cover story this month.

All my records are currently sequestered in a Hertfordshire barn (long, not remotely interesting, story…), so I had to enlist my family to stop me from buying another “Common One”. I could remember, though, buying my first edition from Woolworth’s in Retford, having been sent on a journey into the proverbial mystic by the ’80s bands who learned so much from Morrison: Dexy’s Midnight Runners and The Waterboys chief among them. For many of us, I imagine, every trip into a vinyl cave – on April 18, for Record Store Day, maybe? – can trigger the same kind of forensic memories that King articulates so well. And hopefully, every issue of Uncut can do a similar job.

Since I took over here, I’ve had more reader requests for a Van Morrison cover than for any other artist. I’ve rarely been happier to oblige, and I think it sits pretty nicely alongside some more strong exclusives in the new issue: comeback interviews with The Replacements, Ride and Blur; the gripping yarn of Motorhead, as they hit their 40th birthday; further interviews with Bryan Ferry, Todd Rundgren, Portishead, Lynyrd Skynyrd, The B-52s, Cannibal Ox, Adam Curtis, Xylouris White, Jethro Tull, maybe some more.

For my own part, I spent some time at home with The Alabama Shakes, witnessed the magnificence of D’Angelo live, and reviewed the new Godspeed You! Black Emperor album, among other bits and pieces. Once again, I think we’re slowly starting to cover a broader spread of music in the mag, while staying loyal to the artists that we’ve loved for a long time: on this month’s CD, you’ll find the Malian Hendrix, a Swedish jazz cover of Grizzly Bear, New York rap, Pennine guitar meditations and Cretan jams alongside faithful retainers like Calexico, Bill Fay, Villagers, Bop English (a new name, but actually James from White Denim) and Jon Spencer. There’s also a significant new find from Allan, in the shape of David Corley, that a few of you might find interesting.

Let me know your thoughts, anyhow: www.twitter.com/JohnRMulvey. As Van once pointed out, presciently, it’s too late to stop now…