Noel Fielding asks Alice in the latest issue of Uncut 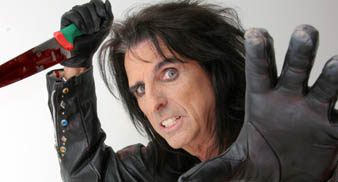 The Mighty Boosh have asked Alice Cooper to star in a goth-rock musical in the latest issue of Uncut magazine.

The Boosh’s glam rock lover, Noel Fielding appeared in ‘An Audience With’ feature in this month’s magazine asking:

“I absolutely love Alice Cooper, and I wonder if he’s ever considered writing an acid rock gothic musical? If we did one, would he co-star?”

“I love those guys! I’m in England a lot, so I’m very aware of Little Britain and The Mighty Boosh. And I’d love to work with them!

“Actually, I do rehearse my performances like a Broadway show. Welcome To My Nightmare is basically about as close to a musical as you can get… so we’re always going to be right on verge of Broadway, just without the horns and the orchestra. Once you introduce an orchestra you’ve killed it. Make it rock! Make it loud!”

Cooper will release his 25th studio album, Along Came A Spider, on July 29.