Special reissue will come with heaps of bonus material 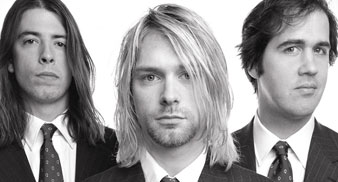 A Super Deluxe Edition of Nirvana’s seminal 1991 album ‘Nevermind’ will be released on September 19 – 20 years after the original came out.

Comprising four CDs and one DVD, the Super Deluxe Edition will contain previously unreleased tracks, rarities, B-sides, alternate mixes, rare live recordings and BBC radio appearances. The DVD will be made up of an entire unreleased Nirvana concert.

‘Nevermind’ has sold over 30 million copies in the two decades since its release. Produced by Butch Vig, it was the second studio album from Nirvana, the iconic grunge band made up of the late Kurt Cobain, Krist Novoselic and Foo Fighters mainman Dave Grohl.

The 20th anniversary of ‘Nevermind’ will also be marked by a series of as-yet-unannounced events.

‘Nevermind’ climbed to Number One in the US Billboard album chart, but only reached Number Seven in the Official UK Albums Chart.