Plus! A longish Q&A with Natalie Mering 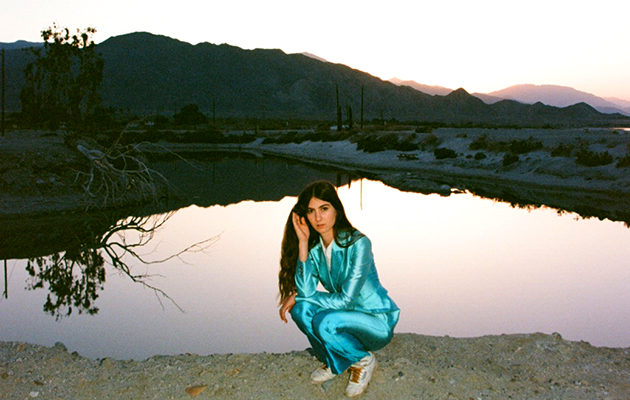 Weyes Blood’s Natalie Mering is no stranger to remote, secluded places. The daughter of musicians – her father briefly had a deal with Asylum/Elektra in the late ‘70s before becoming a pastor – Mering travelled extensively as a child and has continued this nomadic lifestyle into adulthood. Six years ago, she found herself living in a tent in the New Mexico desert. For several months, she wildcrafted plants for a tincture company, using her knowledge of herbal medicine acquired while working on a farmstead in rural Kentucky. During a stint living in Portland she toured with Jackie O Motherfucker; in Philadelphia, she became involved with the city’s improvisatory noise rock scene, self-releasing Strange Chalices Of Seeing, an 11-track CD-R, under the name Weyes Bluhd in 2007. Since then, her music has continued to develop from the ghostly drones of her debut and its witchy follow-up, 2011’s The Outside Room, gradually revealing Mering’s striking gift for otherworldly folk, lysergic experimentation and baroque melodicism.

Inspired by her restless, peripatetic spirit, she recorded part of 2014’s album The Innocents in a Pennsylvania farmhouse while last year’s Cardamom Times EP was captured on reel-to-reel in her own basement apartment in Far Rockaway, NY. Between February and April this year, she worked on Front Row Seat To Earth in a garage studio in Lincoln Heights. Although the Los Angeles suburbs might seem disappointingly innocuous compared to her previous wonderings, nevertheless her eerie, forlorn songs remain reassuringly intact. This latest collection is still tinged with the melancholia familiar from her early recordings, but here they are surrounded by sympathetic arrangements that manage to be both time-honoured and contemporary.

It transpires that the knotty tensions between the old and the new are the defining qualities in Mering’s work. The sounds of traditional instruments – piano, guitar, flutes, horns – are often accompanied by bubbling electronic undercurrents. Mering plays most of these instruments herself, joined occasionally by collaborators including fellow travellers from Ariel Pink’s Haunted Graffiti (Mering guested on Mature Themes): bassist Kenneth Gilmore, keyboard player Shags Chamberlain and Front Row Seat To Earth co-producer, Chris Cohen.

The album’s opening track, “Diary”, begins quietly, with Mering accompanied only by a piano, rising to a melodious crescendo of synth washes and harp arpeggios before finally fading out in a blur of distortion. The strange, stuttering breakdown in the middle of “Do You Need My Love” sounds like Portishead (in fact, Beth Gibbons and Rustin Man’s Out Of Season album is another good reference point for Front Row Seat To Earth). The affecting acoustic refrain of “Generation Why” is discretely dusted with electric organ motifs and soft, sussurating vocal samples.

More radically, “Can’t Go Home” finds Mering’s vocals pillowed by harmonies consisting of her own voice, sampled, multi-tracked and treated: a 21st century chorale, if you like, that demonstrates Mering’s love of early music. “Can’t Go Home” also showcases Mering’s remarkable alto – part Judy Collins, part Nico – that lies somewhere between folk and torch singing. There is a dignity and otherness at work here: her voice sweeps robustly over swelling horns on “Used To Be” while on “Seven Words” finds her delivery softer and more intimate. The album closes, meanwhile, with “Front Row Seat”, a musique concrete style sound collage that invokes Mering’s heady, improvisatory sound trips in Philadelphia.

Thematically, much of Front Row Seat To Earth concerns the business of the heart. “Seven Words” finds her candidly revealing, “I want you mostly / In the morning / When my soul / Is weak / From dreaming”. On “Be Free”, Mering laments: “How do I get through to you / Tried to do / The best I could / Loved you just like a girl should”. But for all the introspective, confessional qualities in these songs, most come loaded with an exhilaratingly dramatic sensibility – as in “Can’t Go Home”, where Mering declares grandly, “Fighter / Do the right thing / Can you suffer more / Let the world / Carve at you heart”. Elsewhere, resolve is delivered with husky resignation, as on the crystalline 60s folk of “Away Above” where Mering confides, “Somethings you / Just gotta run away from / But that doesn’t change us”.

As with most of the songs on this album, there’s a thrill to “Away Above” in hearing Mering both uphold and subvert the conventions of folk music. Where does her voice end and where does some studio manipulation imperceptibly come in to play? It is this methodical exploration of the ancient and modern that makes Weyes Blood such a seductive proposition and the ambitious Front Row Seat To Earth – intimate and enveloping, romantic and psychedelic – marks a significant progression in Mering’s increasingly impressive career.

Q&A
Natalie Mering
How did the title come about?
The long explanation:
The title came about while I was trying to describe whats going on with our perspectives in this day and age.. especially my perspective, in a first world country, theoretically on the forefront of modernity… it’s like I’m witnessing the theater of our planet on a stage, detached from the experience.. not from any fault of our own, it’s just how our mind works. It seems like the changes that are about to take place are catastrophic, insane–the more I thought about our detachment from the environmental realities of our planet, the more I saw it as a symbol for the human experience. We anthropomorphize the world around us, as a stage, a theater, this is the way we understand cataclysmic change, until its immediately in front of us, affecting us… then it’s just sublime violence.
Because the issues at hand seem so insurmountable I think its important as a person to pay respect to the microcosm of their personal experience of the world, to see its relationship to the macro as well– we all fall in love with each other, what happened if we fell in love with the world? We all need to leave each other, to say sorry, to change.. what if we could leave, say sorry, and change our world? The songs on the record are personal, but also pay respect to the bigger theater in which this is all taking place, our planet, humanity.. the colossal world we have more information about than ever before, but still can’t quite seem to grasp outside of our subjective anthropomorphic reality.
Heady stuff…

In what ways do you think this album is a step on for Weyes Blood from The Innocents?
The Innocents I worked with some producers/ mixing engineers that had very strong ideas about my music that I gently acquiesced to–for FRSTE I didn’t have anybody on board like that. I just worked with friends, produced the record myself with the help of Chris Cohen, who has a very similar philosophy as me, and spent a lot of time keeping things within this personal range. The Innocents was made slowly over the course of three years in a variety of different head spaces, FRSTE was made in three months in a small vault of a studio– both records in comparison are very polar, which is nice.
I’ve gotten to sing so much more in the last year then I ever had in my life, touring nine months out of the year traveling minstrel style–I think this really helped me hone in on my voice in a way that I haven’t before. Felt good to produce my own voice in a small room, versus recording in a bigger studio. The songs are ones that I’ve been waiting to record for a long time, lots of experiences to sing about.
Conceptually FRSTE is the departure from youth–this realization that the entire world is around you, in front of you and you must interact or understand the symbolism of your inability to interact–you can no longer be the victim of innocence.

You recorded Cardamom Times on a reel-to-reel in your home in Rockaway NY. Tell us a little about the recording process for Front Row Seat To Earth. Whereabouts did you record it, what time of day, and what was the view from the window like?
Chris Cohen engineered this record–he had a small garage studio in the back of a couple’s house in Lincoln Heights, Los Angeles. The couple were very fond of cats and fed a lot of strays in the neighborhood so there were always lots of strange cats around. Lincoln heights is a very hilly neighborhood too– lots of paths and views of the city. We had no windows, though. We were locked in a vault basically in that garage, you couldn’t tell what time of day it was at all, and the air would get very thick in there. Usually we’d work everyday starting around noon till the evening, only stopping to eat.

You’ve worked with Jackie O Motherfucker, Ariel Pink and Nautical Almanac. How have these experiences shaped Weyes Blood music?
I am, truly, deep down, a fan of music. Especially the fringes– the parts that are more taboo, less accessible. Playing with/in those bands was always an elated experience for me but didn’t really shape my own musical practice. I’ve always had my own thing and have played with others for fun if I am asked. Nepotism doesn’t get you anywhere, anytime I perform with a band it is about them, the music of the moment.. JOMF and Nautical were both so improvisatory…it was free music. Ariel is a legend, singing with him was about tuning into what resonates about us together.
The experiences that have shaped Weyes Blood music the most are more personal events of my life that have forced me into focus. After focusing in specifically on songs and singing, I definitely miss the more experimental/ free aspects of those times when CDRs ruled and Jackie O Motherfucker made up a new set every night…I haven’t peacefully reconciled all of my musical fantasies into one record and my deepest dream is to do so someday in a way that gracefully deceives its audience into thinking it is…beautiful!
…and who knows, there’s still a chance I’ll go rogue and switch back to improvisatory noise music. I daydream about it a lot. But songs are addicting.