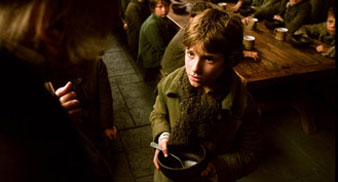 Charles Dickens’ classic story of a young orphan boy who gets involved with a gang of pickpockets in 19th Century London is given the Roman Polanski directorial touch this month, when Oliver Twist hits the big screens nationwide.

Roman Polanski says: “This is a Dickensian tale in the truest sense, which means it is exuberant, intriguing and timeless. And it is full of incident that is constantly surprising…”

Oliver Twist has been scripted by Ronald Harwood and features Sir Ben Kingsley as Fagin, Jamie Foreman as Bill Sykes, Leanne Rowe as Nancy, Barney Clark as Oliver and Harry Eden as the Artful Dodger.

View the trailer for Oliver Twist via the links below: