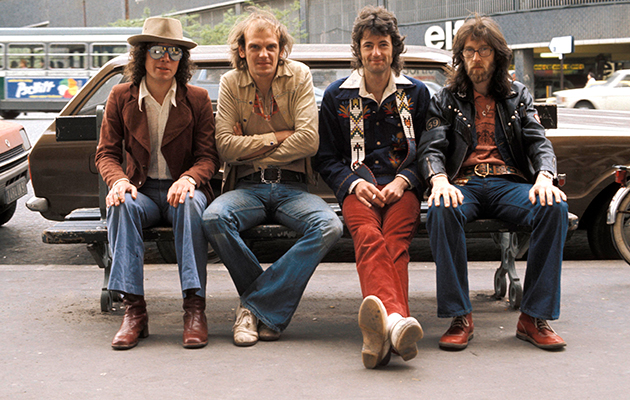 When punk hit, only a few ‘progressive’ bands were deemed acceptable; King Crimson, perhaps, but most definitely Van Der Graaf Generator. Formed by the crazed, roaring ‘Hendrix of the voice’, Peter Hammill, in late-’60s Manchester, they were more adventurous, difficult and kaleidosopic than any of their peers; small wonder, then, that John Lydon, Mark E Smith and Julian Cope are fans.

“From the outside we must have looked completely mad,” says Hammill today, “because there weren’t then that many bands with saxes or organs or bass pedals, let alone ones without any guitar.”

On albums like 1971’s Pawn Hearts – No 1 in Italy – 1976’s Godbluff, or even new record Do Not Disturb, Hammill wrote ever-shifting, labyrinthine epics, even while his musical skills were more suited to a garage outfit.

“Peter is a mystery, isn’t he?” says organist Hugh Banton. “He does seem like a normal person [laughs], but evidently he isn’t. He only ever plays his own music, he wouldn’t get a job in someone else’s band. He’s never stopped for 50 years, just produced song after song. I don’t understand it any more than anybody else does. I don’t suppose he does himself.”

THE LEAST WE CAN DO IS WAVE TO EACH OTHER
CHARISMA, 1970
The second Van Der Graaf album introduces Hammill’s mighty wail, his occult and science fiction concerns, and David Jackson’s double-sax playing

PETER HAMMILL: This is the first proper Van Der Graaf record, because [1969’s] The Aerosol Grey Machine was originally a solo record. Trident was the state of the art studio at the time. At first, it was eight-track, so that would be stereo drums, a voice, and a track per instrument, so it was pretty much as we performed things live. We were very much a democratic band – my job has traditionally been providing the material, singing it and being at times the unbearably egocentric frontman. But we always were a democratic band, it was one man, one vote.

DAVID JACKSON: We did The Least We Can Do… in four days, and that includes mixing it. It was absolutely electric. We were playing, writing and recording songs very fast. Too fast, maybe – in retrospect you think, “My God, that was a bit rough and ready…”

GUY EVANS: One of the things that is amazing and confounding about Peter is that you never know what a song is going to be about next – just as you’re getting into this continuum of epics about the creation of the universe and matter and energy, you’d have a three-minute love song. I think he knows no boundaries, and he’s been super intense for years.

HAMMILL: I was very into science fiction at that time. I was quite under the spell of tarot, too. I’m not sure that I believe in it now, but certainly I did at the time.

JACKSON: I’d been experimenting with two saxes from when I was a teenager onwards. I basically was trying to copy Roland Kirk, but it didn’t really suit the kind of music that I was playing when I was at university. But as soon as I met Peter Hammill, the two saxophones just flew. He liked to play in D and E, keys that no self-respecting jazz musician would touch with a barge-pole, but they were great for playing double horn parts. It was a magical experience for me, because a lot of things I’d written that were never any good for anything, were suddenly much appreciated and thrown into Van Der Graaf songs.

H TO HE, WHO AM THE ONLY ONE
CHARISMA, 1970
With the classic quartet solidified, VdGG hit their stride, with the apocalyptic “Killer”, and some stunning guest guitar from Robert Fripp

HAMMILL: Trident was one of the best studios in the world, at that time, which of course meant it was also one of the most expensive! So with our limited budget, we tended to be going in for three-hour sessions or doing the graveyard shift from one to five in the morning. We were just beginning, with something like “Pioneers Over C”, to make songs that didn’t fully exist until the mixes were put together. We were really trying to push the studio as an instrument. Nic [Potter, bassist] left halfway through, so it’s a group in the course of swerving direction. Our original thought was to have another bassist, but HB [Hugh Banton] put his hand up and said, “I can do this on bass pedals.” We met Robert Fripp through John Anthony, our producer, and probably through the nightclubs of London. Obviously we were all very serious musicians, but even serious musicians at the time used to be out until two or three in the morning. To have the flavour of electric guitar on anything in early Van Der Graaf, the call went out to Robert.

JACKSON: Peter had a very strong idea of what he wanted to do, but he was dependent on us to get these things across. In the beginning he was just strumming away on a guitar, and then we’d turn them into monsters. I’d got this thing that allowed me to play four octaves on sax, so I could play basslines and monstrous riffs. Then I got a Gibson Maestro fuzz, and I was using two different octave systems at the same time. Basically I ended up being able to play two full octaves in each hand.