Up Close And Personal With Brad Pitt

The star of Inarritu's Babel talks us through the movie 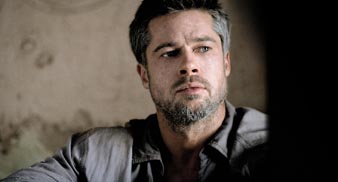 UNCUT: How does playing in an ensemble drama measure up against carrying a movie?
PITT: First of all, being part of an ensemble is always more fun. You’re not scared to film. But the real joy was knowing that I can just go in and concentrate on a particular corner, a particular part of this film. And that it wasn’t just going to be about my story, it’s going to be about all the stories and the cumulative effect once they’re combined. And so it was great fun for me to concentrate on just our sections. Alejandro and company then went ahead and shot for the rest of the year.

U: Now you’ve hit your 40s, are you adapting to these older, less glamorous roles?
BP:There are people in this business who run from age, and you see the detritus left over from that. The denial, I guess. I don’t know yet, but there is that time when you gotta let go, man. Getting older just makes me more efficient and I can get the things done that I want to get done. Before, I meandered. In my younger days, I was a drifter.

U:How difficult is it shooting a movie when you’ve got the paparazzi on your back every minute?
BP:With Babel, they left us alone because we were in this little village in Morocco where you’d have to drive an hour to get there. It was in the middle of this lunar landscape with no electricity. We had to bring it in for the film and we were able to leave it there afterwards, which I thought was nice.

U:Babel seems to imply that the life of a rich American is treated as more valuable than the life of a poor Mexican or Moroccan. Do you agree?
BP: I think there are many political aspects to this film beyond what you’d call America’s self-entitlement. I think it’s about bigger issues of misunderstanding, paranoia, protectionism. So I think it speaks beyond America on these issues, I think it speaks about the world. And that’s what drew me to the film. That’s what drew me to what Alejandro was after and made me want to be a part of it.

U:How has family changed the way the work?
BP:You do everything faster because there’s no time for messing around. I still value the work I get to do but at the same time I value more getting home to the kids, so it makes you more stealthy in your attack on things. In a funny way it makes the work mean more, because I know somewhere down the road now my kids will see this and that layer now is on everything that I approach. It’s definitely part of what I’ll approach in the future. I’ll try to be a little bit more mature about my decisions.

U:Humanitarian causes have become very important to you. Do these kind of issues feed intro what you do as an actor?
BP:I know it has to seep into acting in some way. Maybe not Ocean’s 13! But this film Babel is trying to say that we’re all the same. We need to get our arms around the idea that maybe language or distance separate us, or lack of understanding. But what I drew from the script is the idea that you can watch four very different stories woven so elegantly together, and the base issue is equality. A family living in a hut who have to walk five miles to get their water in Africa, or tend to the goats, is looking for the same kind of dignity and opportunity for their kids as we are in America.

U:Films like Babel seem to suggest a more serious, mature career path for you. Is that how you see your future?
BP:The direction gets clearer because new guys come along and there is not that frenzy or that heat any more. It’s like the haze clears and you can focus. And I guess I focus on the work, not the game.

U:So, looping back, do you remember what film made you want to start acting?
BP:Saturday Night Fever. I loved it – but it wasn’t the bad suits and dancing. It was the idea that I didn’t know people could live like that, I guess. I’d only seen my corner of the world, Oklahoma and Missouri, so I was intrigued by the idea that there’s completely other ways to attack life out there. And I also loved Butch And Sundance. I remember seeing that from when I was in kindergarten.

U: Was there a moment when you thought: Damn! I must act!
BP:It was more like – it was a week before I was supposed to graduate from college, and everyone had applied and were having job interviews, and I hadn’t applied anywhere. I didn’t have a clue, nor did I have any interest at that point. It occurred to me that I wish I’d grown up in New York or LA, because there’s opportunity to go into movies. So within that week, I decided I was going to go to LA. I had no money, so I’d work for a couple of weeks just to get some pocket cash, and I’d load up the car and I’d go to LA. I didn’t finish college, I didn’t go back to classes that week. That’s the way it went.

U: The next film of yours we’re looking forward to at UNCUT is The Assassination Of Jesse James By The Coward Robert Ford. It’s a ways off, but what can you tell us about it?
BP: It deals with the mythology celebrity, and the hunt for that kind of notoriety, what’s behind that outlaw life. The film deals with the consequences of it. And of course, these issues relate to me due to my place in the tabloid magazines…!