The storms battering the South Coast have blown themselves out by the time Club Uncut reconvenes for another year at The Great Escape festival. It’s after midnight and very nearly pitch-black in the Dome Studio just before our first night’s headliners, The Hold Steady, dramatically hit the lights, then the stage. “As the song says,” Craig Finn promises, “we’re gonna have a real good time together.” 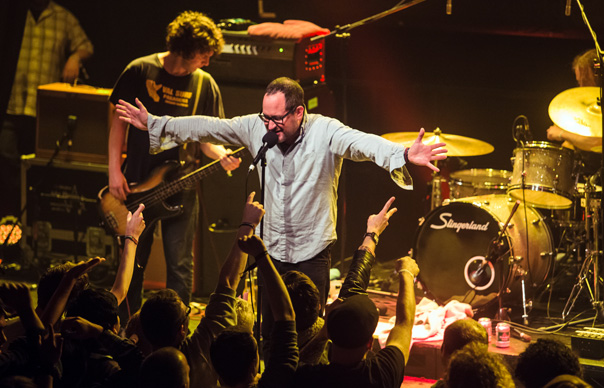 The storms battering the South Coast have blown themselves out by the time Club Uncut reconvenes for another year at The Great Escape festival. It’s after midnight and very nearly pitch-black in the Dome Studio just before our first night’s headliners, The Hold Steady, dramatically hit the lights, then the stage. “As the song says,” Craig Finn promises, “we’re gonna have a real good time together.”

With his close-cropped hair, Finn looks all business, and his band play a tight 45 minutes, focusing on the best of their 2007 breakthrough Boys And Girls In America, and the current Teeth Dreams. 2010’s Heaven Is Whenever is wholly disowned, For “Stuck Between Stations”, Finn holds his hands over the crowd in Springsteen-style testifying. Part of his appeal, though, is that his bespectacled looks make him resemble a Woody Allen klutz more than a Boss, an underdog rocker closer to the audience, claiming his right to be onstage by the force of his songs and his belief in them.

Feedback acts as a bridge to the Motown beat of “Big Cig”, about a girl who “smoked cigarettes ever since she was seven.” “Sequestered In Memphis” provides a still more gripping, cautionary tale, as dime-store novel debauchery and disaster descend on the luckless Finn. “I went there on business,” he says in hapless excuse, clutching his head, as his band’s twin guitars give sympathetic Stones raunch.

The crowd start to pack in from nearby, finished gigs, as the clock ticks towards 1am sweat starts to drip down backs. The Hold Steady have played much bigger places than this upstairs club in the last seven years, but they look comfortable, as if this sort of situation is their natural home.

“I wish we had a song about seagulls,” Finn says, trying to get with the seaside programme. Instead, he plays “Chips Ahoy!”, Boys And Girls In America’s great tale of racetrack romance. The crowd sing along to the wordless chorus, one of rock’s best of the last decade. The big choruses, drum tattoos, keyboard chimes and rasping riffs of punk-sharpened ‘70s US rock punch right through the set.

“Your Little Hoodrat Friend”, from way back in pre-success 2005, finds Finn looking beatific as he communes with the jumping and punching front rows. After a rousing “Southside Girls”, he takes a moment to address what we’re all doing here in 2014, when so many digital pleasures could keep us at home. “You chose to drink some beer, and sing some songs,” he congratulates us. “If we can get in a room and have a rock’n’roll show, I think that’s more and more important.” Rock as a meeting place, not the market-place the wider Great Escape can sometimes seem, is as good a mission statement for Club Uncut as any.

Earlier, PHOX’s recent work at Justin Vernon’s studio might lead you to expect music in Bon Iver’s image, but the Madison, Wisconsin band are agreeably slippery to define. In her diaphanous black dress, Monica Martin has a torch singer’s quiet glamour and smoky voice. Her band, though, mostly play a sort of chamber-country, as Martin’s slow, reverb-assisted croon rings through the room. “In due time if I gain some self-respect/ I can smile upon the day when we first met,” she sings in “In Due Time”, “but I made some swift revisions…” The stiffly formal language, like a Bible-schooled letter from a former century, fits a three-part harmony-soaked country ballad. “This one’s about my sister,” Martin informs us of their final song. “She’s tall as hell…” Its delicate, bashful country somehow slips in an Attractions-style keyboard climax.

The Rails have the hearty folk-rock sound and striking female co-vocalist of early ‘70s Fairport Covention, fittingly as the leopard-spot-scarved redhead by James Walbourne’s side is his wife, Richard and Linda’s daughter Kami Thompson. “They’ve revived the pink label for us,” Walbourne proudly notes of the Londoners’ imminent Island debut. Mandolin and fiddle bolster arrangements with a touch of tightly compressed prog, while narrative songs lean on the folk verities of soldiers and sailors leaving for war, mostly sung by Thompson as the strong, wronged woman left behind. Walbourne leads on the more recent, Stones-style mythology of “the hustlers and the runaways”, and “too much mascara” around a girl’s “sad, sad eyes”. “Panic Attack Blues” is, he jokes, “how I felt this morning”. He needn’t have worried. The Rails hold no musical surprises, but plenty of swaggering spirit.

Sweden’s Alice Boman plays the night’s strangest, most intriguing music. She’s demure and diffident between songs which obsessively delineate a ragingly resentful broken heart. “Are you coming back?” she typically demands. “I’m waiting, waiting…” Her passive-aggressive pleading is backed by the heavy, reverberating pulse of her synth, and fellow bashful Swede Tom, whose work on drums and second synth makes “Over” resemble Visage’s “Fade To Grey”. “Please don’t run from me,” Boman continues with vaulting anguish, implacably hunting a lover who you get the impression is running for his life. Tom leaves the stage for the final song, “What”, where she reaches the desolate heart of the matter. “Come take me out tonight/ Come light my fire,” she sings, part-Smiths, part-Doors, but with an echoing, mournful sigh that is her lonely own.

The man next to me, here for The Hold Steady, talks excitedly as Boman leaves about what a great bonus she’s been, a treat he couldn’t have expected. All part of the Club Uncut service, continuing at the Dome Theatre tonight with Serafina Steer, Syd Arthur, Ethan Johns and Courtney Barnett.
NICK HASTED