Tom Petty is a man of many guitars, most of which seem to make an appearance on stage at some point in tonight’s proceedings. Here’s a red Fender, a blonde Rickenbacker, a white Gibson, back to the Fender, and on. It seems fitting, I suppose: Petty’s first show in the UK for 13 years is very much about craft and musicianship. 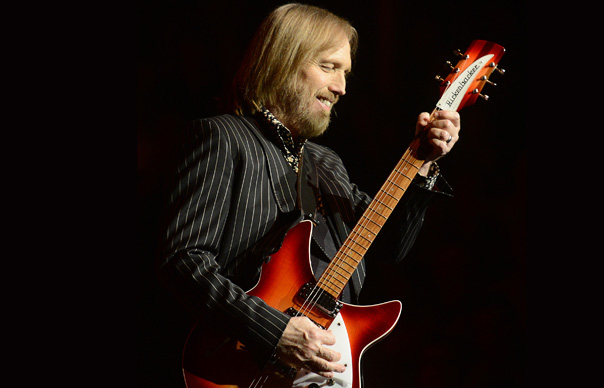 Tom Petty is a man of many guitars, most of which seem to make an appearance on stage at some point in tonight’s proceedings. Here’s a red Fender, a blonde Rickenbacker, a white Gibson, back to the Fender, and on. It seems fitting, I suppose: Petty’s first show in the UK for 13 years is very much about craft and musicianship.

Speaking to Uncut a few issues ago, Petty revealed that he and the Heartbreakers gave up soundchecks a long while ago. You could argue that, after over 30 years of playing together, they no longer need to trouble themselves with this kind of trivial business, such is the level at which they function. The Heartbreakers are a thoroughly doughty bunch of dudes – I’d imagine you could rely on them to water your plants while you’re on holiday. There isn’t a note out of place here, it’s a precision-engineered performance – the opposite, say, of the freewheeling jams you’d expect from a bunch like Crazy Horse. The Heartbreakers are quietly professional men, going about their business with the minimum of fuss. Keyboard player Benmont Tench and rhythm guitarist Scott Thurston, for instance, barely trouble the limelight, but their contribution here is both understated and formidable.

The band are decked out in casual suits, dark greys and blues. Guitarist Mike Campbell wears a black corduroy jacket, and with his hair in dreadlocks, he resembles a hip university lecturer; you could cast him as the Donald Sutherland character in a remake of Animal House, pontificating on the size of the universe while pulling on the end of a roach. Petty himself wears a three-piece grey pinstripe suit and Cuban heels. He reminds me a little of Keith Carradine in Deadwood. There’s something about his manner that appears almost formal – a remnant, you might think, of his Southern upbringing. He’ll take a stiff half bow after each song, as if he’s greeting royalty. And when he introduces “Here Comes My Girl” as “from our 1979 album, Damn The Torpedoes. It was track two on side one,” I half expect him to follow it up by telling us the catalogue number. Surprisingly, he sounds a lot like George Harrison when he sings. Probably because of his long association with Dylan, I expected him to sound more Bob-like. There’s a moment during the Traveling Wilburys’ “Handle With Care” where I wonder whether he’ll slip into Bob or George; as it is, Scott Thurston mans up with what appears to be an impressive Roy Orbison impression.

The hits are tremendous, particularly “Listen To Your Heart” with its hopped-up Byrds vibe. Mike Campbell regularly gets to show his chops, particularly a brilliant extended coda on “Don’t Come Around Here No More”, when the band finally cut loose, wind the clock back a couple of decades and throw themselves into the feedback Campbell coaxes out of his guitar. A few more moments like this would have been great. There’s fun, too, with a muscular version of Fleetwood Mac’s “Oh Well”, where Petty trades one of his many guitars for maracas and Campbell cranks out the riffs. At the other end of the scale, “Learning To Fly” is nicely understated, as is a semi-acoustic “Free Fallin’”.

As Petty’s first gig in the UK since a mini-tour of Europe in 1999, this felt like a triumphant return to English soil. At one point, coincidentally or not, the lights hit Petty full on as he stood with his arms raised and outstretched; it causes the first of the night’s many ovations.

Tom Petty and the Heartbreakers played: