Here are the full transcripts from our new cover feature... In the second part Donovan explains how Zeppelin were 'formed' during the recording of 'Hurdy Gurdy Man'... 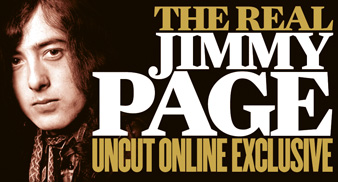 Here at Uncut.co.uk, we’ll be posting the full and unedited transcripts from those interviews, including words from Robert Plant, Jeff Beck, Roy Harper, Steve Albini and more.

UNCUT: When did you first become aware of Jimmy Page?

DONOVAN: There was Big Jim and Little Jim – Big Jim Sullivan and little Jim Page. Big Jim was the no. 1 session guitarist at that time, the master of the riff, and I think he might have taken little Jim under his wing – maybe got him jobs. Maybe they’d say, “This is a job for Big Jim,” and he wouldn’t have time, he’d say, “Give it to little Jim.” It was a time when there were less producers, less session guys, and they were all pretty much jazz. I’m not sure if Jimmy was asked for specially. I didn’t know him socially, because in those days sessions were three songs, three hours. He was long-legged, not-so-long-haired then, dark clothes, bohemian but quiet. Who would’ve thought this guy would become a giant – the great treasure of the Pagan Celtic Rock of Britain, Ireland, Scotland and Wales.

What can you tell us about the 1968 sessions for ‘Hurdy Gurdy Man’?

Many people have said over the years how important that session of John Paul Jones, Jimmy Page and me – and maybe Bonham, who said he was there – doing ‘Hurdy Gurdy Man’ was. I was developing a story-telling thing, and I wanted power-chords, because I’d obviously heard Dave Davies and Hendrix, and knew Pete Townshend. Originally I wanted to give ‘Hurdy Gurdy Man’ to Hendrix, but he couldn’t come in. So Mickie Most suggested Jimmy. [Musical director] John Cameron told him, “All you’ve got to do is listen to Donovan’s guitar. Although it’s acoustic, the way he’s hitting it is the way the power-chords would go.” Rather than plug in, I was hitting driving chords on the acoustic in such a way that they buzz. So I guess Page listened. Jimmy added power and pagan rock. To this day, everyone wants that sound. And John Paul Jones arranged it, he gave the shapes to those sounds. And of course we really should have stopped the guitar solo, because I had another verse to sing that George Harrison had given me. But when we heard this thing that Page was doing coming out, we just said, “Keep playing…” That might have been the first power-chord solo. Mickie Most‘s office in Oxford Street had an adjoining door to Peter Grant’s. Maybe the band heard how ‘Hurdy Gurdy Man’ went…and why are we doing sessions when we can do this? And they became the greatest Pagan British Rock Band.

What about later? Did you stay in touch?

It felt like he wasn’t going to lift those guitars again?

Jimmy was quieter than I remembered him. His interest in esoterica was interesting. He was a collector of rare Aleister Crowley books, and people spoke of it as black magic. But the performance with stringed instruments comes with a tradition of philosophy and literature, and I considered him very well-read, Jimmy, and one of the three great gunslingers of our generation on the guitar, with Beck and Clapton. What distinguished him was invention; the folk style, arpeggio; and, not so much jazz, that was more Beck. But the Celtic rock, which was not like Clapton or Beck.