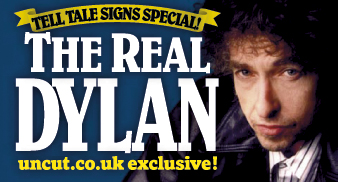 You can read the previous five transcripts by clicking on the side panel (right) and all of the exclusive online series in the Uncut Special features archive here.

How did I get the job? Daniel Lanois called me. He didn’t tell me when he called that it was going to be a Dylan record, though. I was living in New Orleans, and I was basically in the right place at the right time, I guess. But I’d *heard* that he was doing a Dylan record, so I wasn’t too surprised when I showed up and Bob Dylan was there.

I’d had this record out in 1987 that made some noise in America and Canada, Gypsy Blood. And I heard later that that had been lying around the studio and Dylan had listened to it, and Dan, and that’s why they invited me on the session. So Dylan was aware of me when I showed up.

It was different. We were recording in an old house, we weren’t in a studio, and we were basically sitting around the living room in a circle, just sitting on chairs, with the drummer, Willie Green, just off to the corner a little a bit. There were no baffles or anything, we had monitors, and our amps were stuck off in the closest somewhere, kind of hidden. Bob had his little stand there with his lyrics, and we’d just cut off into something.

Seems like we were cutting these songs all kinds of ways. Rock groove, slow groove, a funk or folk kind of groove, just trying different grooves and different tempos to this stuff. He didn’t say much about what he was after. Nobody ever did point us in any particular direction or anything. Bob would just kind of put his head down and start playing, and we’d just tag along.

It just seemed like it was all a big experiment, try the song twenty different ways. I was a little bit surprised, thinking, “Why are we doing this?” There was a lot of experimentation, and that did surprise me. I had thought he’d come in with things a little more set in his head. But, with him, I guess he’d probably just doodled with these songs on the guitar or piano, and now that he was trying them with a band, it was up for us to try and create then, try different ways, and latch into one that he’d like. Then I guess it was up to Dan or Malcolm [Burn, engineer] or Mark Howard [engineer] to go through all those tapes and find the one that popped up.

We’d start around eight o’clock in the evening and finish whenever that was – two in the morning maybe. And after I left, they’d stay longer. I remember that song, “Man In The Long Black Coat”, we’d tried that with the band, and then Bob, Dan and Malcolm did it themselves after we left, and they used that version on the record, without the drums and all. I remember, too, that we were doodling with half of the songs that wound up on his *next* record, Under The Red Sky.

Bob was doodling a lot with the lyrics. He used a pencil. He didn’t use no ink-pen. And it was like he was always making changes and additions and subtractions as he went. I mean, an elephant could’ve walked in through the room and he wouldn’t have seen it. His concentration is really unbelievable. Dan and I actually commented on that later when we were chit-chatting about things. He can really concentrate.

One thing that sticks with me, I kind of got a wow-factor from Bob this one time. I played this little guitar solo on the end of this song “Disease Of Conceit”, he kind of gave me the wow-factor with that. He wrote me a letter after the session, saying that he’d played that recording for Eric Clapton, and Clapton was wondering if it was Mark Knopfler playing. I guess he was feeding me a compliment – I wasn’t sure – but I know he liked that.

For me, Bob was really easy to work for. But, in some ways, I think he was a pain in the ass to some people. Sometimes he’d argue with Lanois, looked like just for the sake of arguing. Y’know Dan’s a real nice, soft-spoken guy, smooth and easy. But I think, at first, before Dylan realised he had a record there, I think he was aggravated, maybe even a little nervous about the outcome of this project. At first. But I think at the end, he was a lot different. I remember he did a drawing of Daniel, and he brought it offer, but he wouldn’t sign it. But then, after he’d left, he came back and signed it. And he was pretty nice to Daniel at the end, but – not at first. Malcolm Burn told me that I was the only one Bob liked for the first couple of weeks – but you’d have to ask Bob Dylan if that’s true or not.

After reading his book, Chronicles, though, it seems that that was a crucial time in Dylan’s life. It was kind of like: shit or get off the pot in his music career. I think he was a little apprehensive about it, and he didn’t really know who Daniel Lanois was that much at that time, and if he could make him a record. But, after he realised that they were going to make a good record there, I think Dylan softened up a lot.