The Making Of… The Beach Boys’ ‘Good Vibrations’

The reunited Beach Boys' return to the stage is reviewed in the latest issue of Uncut, out now – and as their new album "That's Why God Made The Radio" is also fresh in shops, it seemed time to revisit this piece from Uncut's June 2007 issue (Take 121)… Brian Wilson, Mike Love and Al Jardine guide us through their perfect ‘pocket symphony’, three minutes and thirty-six seconds of avant-garde pop. Interviews and intro by Rob Hughes. ________________________________ 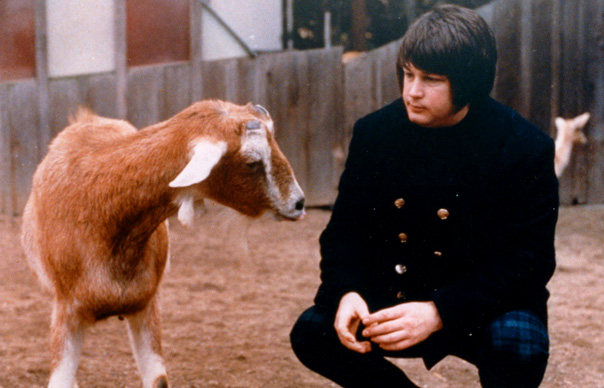 The reunited Beach Boys’ return to the stage is reviewed in the latest issue of Uncut, out now – and as their new album “That’s Why God Made The Radio” is also fresh in shops, it seemed time to revisit this piece from Uncut’s June 2007 issue (Take 121)… Brian Wilson, Mike Love and Al Jardine guide us through their perfect ‘pocket symphony’, three minutes and thirty-six seconds of avant-garde pop. Interviews and intro by Rob Hughes.

Throughout 1965, while the other Beach Boys were out on the road, Brian Wilson stayed home, instead pouring his energies into a new kind of writing and production. Out went surf, girls and fun fun fun, and in came a preoccupation with webs of sound, complex arrangements and classical textures. As Wilson’s consciousness bloomed – a spiritual awakening fuelled by acid and weed – so had the music.

By the following February, in the middle of sessions for Pet Sounds, the 23-year-old began tinkering with a new song. Its inspiration was a childhood memory of a dog barking at him while out with his mother. “Don’t act scared,” she told him. “They pick up the vibes.”

The idea of tuning in to others’ vibes now fascinated Wilson. The song became a work-in-progress, snatched at during breaks in recording. Returning to it in April, Beach Boy Mike Love wrote fresh lyrics, and as Wilson smothered his cousin’s words with fuzz bass, clarinet, cellos, harp and a theremin, “Good Vibrations” began to take shape.

For his three-plus minutes of pop perfection (“his whole life’s performance in one track” according to engineer Chuck Britz) Wilson had used up 90 hours of tape from 17 separate recording dates with LA’s top sessioneers. The cost of recording was phenomenal: between $50,000 and $75,000.

“Good Vibrations” became the biggest Beach Boys single ever, and the media branded Wilson “a genius”. “I’m not a genius,” he countered at the time. “I’m just a hard-working guy.” ROB HUGHES

Brian Wilson
Beach Boy, writer, producer
“Good Vibrations” is a wonderful tune. The other Beach Boys had a lot of input. We got together and had a discussion beforehand. We all wanted to do something different, make some music that would last forever. Not just surf songs and car songs. It was all about creating lasting music. And that led to “Good Vibrations”. It was one giant step forward.

I wanted something with real merit to it, artistic and smooth. Some people say it was written on acid. But I don’t accredit it to LSD, I accredit it to marijuana. I smoked marijuana just before I wrote it. I was playing at the piano and began singing about good vibrations, just fooling around. Then I came up with a little melody at the piano [sings it]. Tony Asher had written some original lyrics, but my cousin Mike Love had some great ideas. He came up to the house and said “What if I went, ‘I’m picking up good vibrations’.” And the rest is history. Stephen Foster [the 19th century American songwriter, who penned “Beautiful Dreamer” and “Camptown Races”] was a big influence on me, especially the sound of “Gotta keep those lovin’ good vibrations happenin’ with her”. I never would have thought of that myself.

Recording it was a long process, but I was determined to stick it out until the end. It took six weeks to record. We recorded it in five different studios and I wrote out each player’s part on music paper. We recorded the verses at Gold Star, the choruses at Western Recording Studios and the bridge at Sunset Sound.

The voices were all recorded at Columbia Studios in LA. I recorded the voices in sections. To begin with, I did the “Bop Bop Good Vibrations” parts. Then a week later, I said there should be something coming right after that. So I finally came up with the high parts, with the “Bop Bop” straight afterwards. The idea was to overlap and create a double dose of harmonies.

And the bass part was important to the overall sound. I wanted Carol Kaye to play not so much a Motown thing, but a Beach Boys-Phil Spector riff, inspired by Phil. Carol played bass with a pick that clicked real good. It worked out really well. It gave it a hard sound. And I was thrilled by Paul Tanner’s theremin sound. It was scary to hear that sound, but good scary.

Derek Taylor had done The Beatles’ publicity and took The Beach Boys on, too. When he first heard “Good Vibrations”, he said, “I call that a pocket symphony”. Isn’t that brilliant? The Capitol execs loved that tune. I remember the A&R man saying what a great pop record it was.

Mike Love
Beach Boy, lyricist
My first impression of “Good Vibrations” was that the band could have been James Brown’s Famous Flames. The original takes were very R’n’B. There are several different versions and it took months for my cousin Brian to decide which one would be the final one. Then he asked me to bring the lyrics over. And I kinda lagged on it. Being the Pisces procrastinator that I am, I left it until the drive from North Hollywood to the studio to write them. It took me about five minutes. We were in the yellow Convertible XKE I’d bought for my wife Suzanne, who was pregnant. We were driving down to the city and I asked her to take down these words.

We got to the studio, I wrote them out on a scrap of paper and Carl went ahead and sang the lead. And of course, I came up with the part that goes: “I’m pickin’ up good vibrations/She’s giving me excitations”. That’s my musical contribution.

This was before the Summer of Love, but there were definitely psychedelic rumblings on the West Coast. I felt “Good Vibrations” was The Beach Boys’ psychedelic anthem or flower power offering. So I wrote it from that perspective. The track itself was already so avant-garde, especially with the theremin, that I wondered how our fans were going to relate to it. How’s this going to go over in the Midwest or Birmingham? It was such a departure from “Surfin’ USA” or “Help Me Rhonda”.

So I thought the one thing that everyone can relate to is boy-girl. You know, “she’s giving me excitations”. Had that track not had anything to connect to people intellectually or emotionally, then it would have been a brilliant piece of music, but perhaps not gone to No 1.

Al Jardine
Beach Boy
Brian was absolutely at his peak back then. God, he was just like a freight train. We were hanging on for dear life. The Beach Boys were in and out of the studio day and night. We’d been busy touring Japan while Brian was composing it. We didn’t have much time to rehearse, so we just went for it. But Brian was so prepared. There were several edits, I recall. I was especially taken with the many mood changes in “Good Vibrations”. In particular, the part I call the Stephen Foster section. For me [sings] “Gotta keep those lovin’ good vibrations happenin’ with her” was similar to “Gonna lay down my heavy load, down by the riverside”.

I thought the tempo changes and chord changes were amazing. To this day, Brian has a wonderful sense of chord structure that baffles my mind. No one else sees it the way he does. And on “Good Vibrations”, you could even hear the different cue changes from one studio to another. For example, right at the beginning, the bass changes!

I never did any drugs at all. I tried to get through to Brian, too, but he just wasn’t able to see it. But he had lots of people coming up to him, wanting to be his best buddy, and get high. Brian took too much and became overwhelmed. But then he does credit some of his best work to drugs. “Good Vibrations” is very damn brilliant.

Carol Kaye
Wrecking Crew bassist
By that time, Brian was showing a lot of genius writing. He was growing all the time and we didn’t know where it would end. I didn’t know about the drugs until later on, but he did start doing things in piecemeal fashion. It was like he was scoring a movie. But 12 dates on “Good Vibrations” – at three hours a date – is a long, long time to spend on one song. It was very unusual. But the way he kept changing the music around was interesting. We knew he was trying to perfect a great hit. And we knew it was gonna be big.

Brian had all the sounds in his head. He knew what he wanted and wrote out the bass parts for me. They were written crudely – it wasn’t the work of an educated person – but we could read it. Brian was a really sweet guy, but he could be cocky when he wanted to be. It was that cockiness that comes with youth. But he was sharp, with very good ears. And he was completely engrossed in what he was doing.

Hal Blaine
Wrecking Crew drummer
It was monumental in concept and delivery. Brian was at the top of his creativity. He was such a young guy composing, arranging and directing, and all the while with no real score to work from. A brilliant young man.

Brian first heard me on the Phil Spector recordings. We became very good friends, a mutual admiration. He never considered a take ‘perfect’ unless I came into the booth and listened. With “Good Vibrations”, there were many sessions. I would listen to playbacks only when asked by Brian. My advice was only how a take felt. If it felt good, we had a good basic track.

I must also add that, in recent years, Carol Kaye has claimed there never was a Wrecking Crew, that “Hal Blaine made up that name in order to sell his book”. Somehow she’s forgotten that The Wrecking Crew was established in the early 1960s. The Hal Blaine book wasn’t done until the 1990s. She’s an elderly person who claims The Wrecking Crew was known as ‘the clique’. No one, except her, has ever heard of that name. Wake up to reality, Carol! Go start your own band!