The Making Of… Metallica’s Enter Sandman

Metallica headline Glastonbury this weekend, and “Enter Sandman” will most likely be a highlight of their set. So we delved into the archive, back to Uncut’s March 2007 issue (Take 118), to discover how the group created The Black Album’s anti-lullaby. Lars Ulrich, James Hetfield and producer Bob Rock spill the beans to Stephen Dalton… 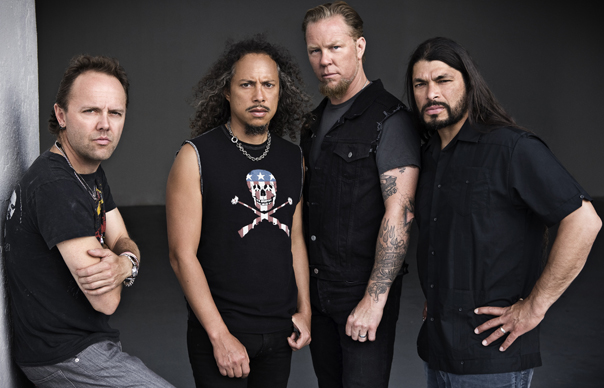 Metallica headline Glastonbury this weekend, and “Enter Sandman” will most likely be a highlight of their set. So we delved into the archive, back to Uncut’s March 2007 issue (Take 118), to discover how the group created The Black Album’s anti-lullaby. Lars Ulrich, James Hetfield and producer Bob Rock spill the beans to Stephen Dalton…

In 1990, Metallica were the world’s biggest underground band. But as the thrash metal pioneers began recording their self-titled fifth record, aka The Black Album, the dominant sound on US radio shifted towards the angry, cathartic, darker introspection of grunge and alternative rock. The hard-rocking foursome were perfectly poised to capitalise on this punky new racket. Kurt Cobain was, after all, a Metallica fan.

“Enter Sandman” became a huge hit, propelling The Black Album to a chart-topping debut in October ’91 – just a month before Nevermind. Total sales later topped 14 million. Even today, this hypnotic anti-lullaby remains one of Metallica’s signature anthems. As Hammett says: “That’s our ‘Stairway To Heaven’, our ‘Jumping Jack Flash’, our ‘Live Forever’…”

Included in Rolling Stone’s 500 Greatest Songs Of All Time, “Enter Sandman” has since been covered by artists as diverse as Pat Boone and Motörhead. Here drummer and co-writer Lars Ulrich, James Hetfield and Bob Rock tell Uncut about the song’s troubled birth and lasting legacy.

Lars Ulrich (drums): After four records and being in LA, you could feel the imminent death of the whole hair stuff and that wanky fucking radio bollocks coming out of America. Everything we had grown up rebelling against in the ’80s was dying. Bands like ourselves, Alice In Chains and Nirvana were ready to enter the ’90s with a different aesthetic.

“Enter Sandman” was the first thing we came up with when we sat down for the songwriting process in July 1990. The 10-minute, fucking progressive, 12-tempo-changes side of Metallica had run its course after …And Justice For All. We wanted to streamline and simplify things. We wrote the song in a day or two. All the bits of “Enter Sandman” are derived from the main riff.

But what’s interesting is, it was the last song James wrote lyrics to. So in the spring of ’91 he came in with these lyrics about crib death – the line “Off to never never land” was originally “Disrupt the perfect family”. Nice, friendly feelgood lyrics! We sat down and said, “No disrespect, you’ve written great lyrics over the years, but maybe the subject matter and the vibe in these doesn’t fit the mood of the music…”

It was very uncomfortable as we’d always prided ourselves in keeping our noses out of telling each other what to play individually. But James took it rather well, and a couple of weeks later came in with new lyrics.

The Black Album was the hardest record we ever made – we were just not used to people telling us what to do. You’ve got to understand where we came from. We’d spent the ’80s making our own records. Then we realised we needed somebody to help us make records that were sonically better, so we sought out Bob Rock.

We had a great time getting to know each other, then all of a sudden we were stuck in this studio in LA and he started kicking our balls. We were like, “Who the fuck is this guy?” That took a little getting used to. But we survived the process and in the year after making the record we became friends. We’d wind Bob up by putting porno pictures all over the studio wall, and most of them were male. Nothing winds up Americans more than the sight of a 12-inch erect penis. It puts them at great length to convince you of their heterosexuality. Us Europeans are more comfortable with that stuff.

I campaigned for “Enter Sandman” to be the album’s opener. I felt it was a great intro to our headspace of 1990 and ’91. In terms of sales, it started the project off rather well. We still refer to it as the song that keeps the pool heated at a comfortable 88°, and we love it for that. I can’t say I get sick of playing it. It still works for me.

James Hetfield (vocals, guitar): “Enter Sandman” has just two riffs in it, which is pretty amazing. To me, the …And Justice For All album sounds horrible, awful, can’t fucking stand it. That was our fancy stage, showing off too much. We knew we had to move on and The Black Album was the opposite. So when me and Lars got back together after a short break, I said, “We gotta really try and write some shorter, to-the-point songs.” We had always tried to write shorter, it just never happened.

We’d had that title “Enter Sandman” for a long time. It was originally gonna be about crib death – y’know, baby suddenly dies, the sandman killed it. But that’s a little corny. I wanted more of the mental thing where this kid gets manipulated by what adults say. And you know when you wake up with that shit in your eye? That’s supposedly been put in there by the sandman to make you dream. So the guy in the song tells this little kid that and he kinda freaks. He can’t sleep after that and it works the opposite way. Instead of a soothing thing, the table’s turned.

Bob Rock was a huge target. Everyone blamed him – he got some horrible death threats and shit from fans. A lot of blame was put on him for something we wanted. Blame us for everything.

Bob Rock (producer): It was kind of friendly in the beginning. I don’t think I had any idea of the intensity of the personalities involved, especially James. The funny thing is, it’s not like they impressed me, I wasn’t a fan. I thought they were good, but it wasn’t like how everyone else viewed them. I really didn’t give a shit, to be honest.

So when they started doing things the way they had always done, I just gave it back to them. They were quite taken aback. Because I didn’t care, so when they’d do stupid things I’d call them on it. Lars would show up really late and I’d say, “What a fucking asshole you are…” I don’t think people did that to them before.

At the time, Metallica had this rule; nobody could comment on anybody else’s stuff. But the original “Enter Sandman” was about crib death. Nobody had ever talked to James about his lyrics so they told me I had to do it. Here’s this guy who’s basically Mr Grouchy, the Mighty Hetfield. But I just said, “You’re selling the song short, it’s so easy to just go to simple stuff like that, but it’s harder to come up with something good that means something…” I think that was the beginning of trying to give James the confidence to reach for more.

Back then, the way Lars looked at drums was so foreign from other people I’d worked with. But now I see why he is so unique and just so fucking good. It’s almost like he plays drums to James’ riffs like Keith Moon played to Pete Townshend. The guy is brilliant. He’s very underrated as a drummer.

After 15 years working with Metallica, all I remember is that was the only album I ever did with them where I got four guys who all had the same kind of vision. When you have a goal to be the biggest band in the world, you kind of put all your personality things to the side. It’s almost like a marriage.

With The Black Album, they got what they wanted, to be the biggest band in the world. Which brings the personality problem. The whole thing changed. After that, they weren’t four hungry guys who wanted to take on the world.